The day Trump flew me to LA to promote Australia 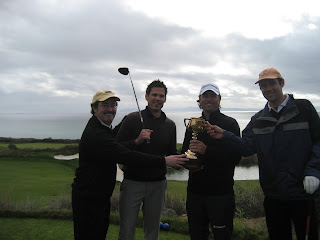 So we have a president who wants me to love Tom Brady and hate Australia? Sorry, but I cannot do either.

I love Australia! And it’s all thanks to Donald Trump (and Australian supermodel Elle MacPherson).

Trump shocked the diplomatic world this week — again — by attacking Aussie prime minister Malcolm Turnbull. He rudely dumped all over Turnbull and the land down under.

It runs contrary to what Trump, in effect, told me in 2008 when he flew me out to Los Angeles to golf at Trump National for a day celebrating all things Australian.

Let the surreality of that sentence sink in for a second.

In hindsight, it seems like a dream to me, too.

I remember getting an urgent phone call from a Manhattan public relations executive who called to gauge my interest in flying to Los Angeles to golf the ballyhooed $264 million Trump course and spend the day learning about Australian tourism.

He said, too, I’d be in a foursome with Aussie pro Mathew Goggins.

He asked if I was busy.

I told him I’d not been busy for about four consecutive years. I was being honest because I didn’t want him to think having me there would lead to an avalanche of free publicity. I knew it would have been a difficult story to sell and said so. In fact, this is probably the first time I’ve ever even written a word about it.

I’m convinced he was being pressured to make it appear media heavy hitters would attend to satisfy higher ups insistent on flash. My credentials — bylines in many major publications (including Golf Magazine) — could persuade publicity seeking organizers I was legit.

Was I vetted by Trump?

It’s possible. But it wasn’t extreme vetting, extreme meaning no one bothered to verify my worthiness with Val.

Did I have any questions?

One: Will Elle Macpherson be there?

“Doubtful, but about two dozen girls who look like Elle Macpherson will be.”

Macpherson’s rise coincided with that of my hormones. I always had a thing for her. She’s 52 today and still fantastic. I recently learned Billy Joel wrote the beautiful “And So It Goes” about the end of their torrid romance when he was 34, she 19.

I’d fly from Pittsburgh to Detroit to L.A., and spend the night in Long Beach. The next day I’d be chauffeured to the course where I’d spend the day golfing before being whisked back to the airport.

I was surprised to arrive and learn the guy wasn’t jagging me. The host introduced me to the 200 other golfers at the formal breakfast like I was a big deal and I got to play a round with Sydney native Mathew Goggins and two other Aussie blokes.

Trump wasn’t there. Had we met, who knows how my opinion of him today would differ? We may have hit it off. Heck, it might be me not Betsy DeVos vying to be Secretary of Education.

It was the only round I’ve ever played with a PGA Tour winner and Goggins couldn’t have been friendlier. He was funny, courteous, helpful and eager to share his insights about being one of the 125 best golfers on the planet.

The blokes? They were loud, profane, boisterous and prone to unleashing loud farts in my backswing.

So we really hit it off.

I mean it. It was a really special day.

And every tee had some pair of fresh Australian lovelies plying us with meat pies, Fosters beer, wine or some other antipodean staple.

Every one assured me if I ever came to visit, I’d have a grand time.

It never dawned on me ’til this week, but maybe the experience means I’d make a good U.S. ambassador to Australia.

I have friendly connections, excel at drunken schmoozing and made it this far in the blog without referencing “Crocodile Dundee” or the awful “shrimp on the barbie” cliche

And I’ve been vetted.

I’m practically in the clear.

Just as long as no one bothers to vet me with Val.

A Mo-vember tribute to the hairy ribbon