Someone needs to yank off Trump's rug (and 25 Trumpy tweets) 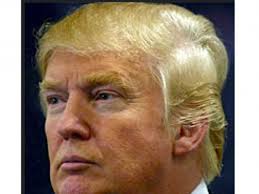 I’m convinced the only way America will truly unite is when some brave, possibly suicidal soul, gives a mighty two-handed tug on what we euphemistically call Donald Trump’s hair.

I suspect it’s constructed to conceal a pair of Satanic horns.

His hair is to me the great under-reported story of the ’16 campaign.

I think one of the reasons he says so many bizarre things is to distract us from wondering more about his hair. It’s as if he knows the only way to conceal the terrifying things inside his head is to put something even more terrifying on top of it.

Some allege it’s a scalp transplant. Given his nativist proclivities, a scalping homage to American Indian makes sense. With Trump it’s all about heritage. Or in this case “hairitage.”

He’s for years contended it’s real, giving him at least more credibility on this one esoteric issue than he last week had on abortion.

I say this for the simple reason that no one’s ever seen him at a barber or hairstylist.

And anytime any national figure wears a conversation-stirring coif, some enterprising reporter somewhere ferrets out the stylist and the stylist invariably talks. And talks.

It’s just what they do. They can’t help it.

Tony is trying to get under Junior’s skin during a golf match by hinting his uncle committed with a female companion a salacious kind of intimacy he-men mobsters find repulsive.

And Tony just won’t let it drop, even committing the etiquette breach of talking during Mikey Palmice's backswing.

Junior explodes: “Will you let the man swing! You yap worse than six barbers!”

To further cement my point, the whole argument began when Junior’s girlfriend couldn’t keep from blabbing to customers about Junior’s affections. And she was also a hairdresser!

Bob Columbe is another salient reference. He famously gave Ross Perot, a disruptive presidential front-runner for the ’92 election, $5 haircuts.

He was on the news all time time.

But of Trump’s hairstylist, no one’s ever heard a peep — and I use the word peep deliberately because peep yellow is the most dominant color of the 69-year-old’s mane.

I blame a Pecker for this failure. Specifically, David Pecker.

He’s since 1999 been the CEO of American Media, publisher of National Enquirer, the magazine that in March endorsed Trump for president. It was the magazine’s first political endorsement.

Normally, we could all count on The Enquirer to sink it’s reportorial teeth into a story like the source of Trump’s hair.

It would alter photos to show what he’s supposed to look like with natural hair. It would do a creative hair timeline. It would quote experts.

And it would engage in the checkbook journalism necessary to find the smock-wearing scissor maven who did Trump’s hair.

It’s why I think the traditional media is letting us down.

Some are predicting last week’s cavalcade of fiascos will be Trump’s downfall. It should, along with the expected Wisconsin thumping, be just that.

But logically he’ll continue and could revive.

That's why footage of someone yanking on his hair — and his visceral reaction — is necessary to prevent his further rise and any catastrophic consequences.

It can’t be some run-of-the-mill rope-line protestor. It has to be someone who has casual access. And they’d need a big audience so that narrows it down to a media personality.

And it would help if that person enjoys ambitions to be famous and has a bit of an ax to grind.

My @8days2Amish tweets on Trump …

• Question for legal scholars: Is it constitutionally possible for a sitting president to appoint himself to a Supreme Court vacancy? Two or three vacancies even?

• Remember back when everyone said Trump was finished for tastelessly alluding to Megyn Kelly's menstrual cycles? We were so quaint back then.

• I knew Donald Trump ran beauty pageants. What I didn’t know was he judged them and that we were all contestants. #Carly

• Thought of way to ensure real face time with Trump: Tell his people sketches of how he'll look on Rushmore ready and he needs to choose most flattering.

• Something tells me he admires Trump's moxie, but thinks the needs the guidance of an old Washington hand. Yes, he thinks America is ready for Trump/Cheney.

• What would the repercussions for humanity be if aliens landed and said "Take me to your leader," and the greeter took them to Trump?

• NASA deserves ridicule for saying there are 8.8 billion Earth-like planets. Wrong! None of them have Trump!
Posted by Chris Rodell at 11:08 AM