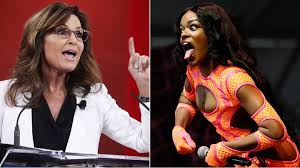 They are so disgusting, vulgar and violent they stirred my long-buried chivalrous nature. I reflexively wanted to comfort the victim of her vituperations.

This is all surprising even to me because the fair damsel is none other than Sarah Palin.

I disagree with everything Sarah says or stands for and understand she’s become expert at dealing with personal attacks.

But what Banks tweets? Wow.

I won’t even repeat any of it here, but it is true hate speech.

Palin is suing, which seems like a reasonable reaction by someone who doesn’t understand that even hate speech is protected by the First Amendment.

Still, of course, it’s all fascinating.

On the one hand we have a public figure now famous for saying hateful things that offend the moral decencies of millions of Americans.

Wait a second. I think I’m describing the same person.

Who is Azealia Banks?

She is a 24-year-old NYC rapper prone to outlandish pronouncements. Her most impressive credential to me is her monumental twitter feed. I don’t think she ever sleeps. She tweets like you and I respirate.

She says she’s an atheist on one tweet and then 30 seconds later purports to be something of a religious scholar when she tweets Asians won’t be in heaven because not a one of them is mentioned in the Bible.

So your fears of heavenly overcrowding should be at least a bit eased.

It’s wacky. It’s offensive. It’s unrelenting. It’s like a stream of consciousness from a woman who seems to have been unconscious while the teachers instructed others about civics.

So in some ways she’s the blacker, filthier, bi-sexual version of Sarah Palin.

The fight began when Banks fell for a satirical post that claimed Palin said black folks were better off as slaves, proving once again parody is best when it masquerades as what Colbert declares is “truthiness.”

Palin orates in a style I call provocative incoherence.

Her every utterance seems designed to provoke in every listener either adulation or animosity. It’s the only red meat over which even devout vegetarians drool.

And she’s the kind of gaffe-machine that reminds me of a line from an old Stephen Bruton song: “Just enough brains to outsmart herself.”

It even happens, gloriously, in her make-peace response to Banks’s barrage.

“In this life, you have been blessed to be given an influential platform. So have I. Why don’t we work together to strengthen both our platforms and together do something worthwhile — like condoning racism!”

I like to think she meant “condemning” racism, but with Sarah you just never know.

I think with Banks Sarah is learning it’s easy to provoke a reaction by those who oppose you, but it’s impossible to control who or what you provoke.

Let’s, for God’s sake, tone it all down.

Banks has said, c’mon, she was just joshing. She doesn’t really think Sarah should enjoy being gang-raped by big black men.

And maybe Sarah should realize “real America” is always going to include, like it or not, people like our X-rated rapper.

Banks is wrong to say those things about Sarah or anyone. She should through her art try and elevate, although that might be a lot to ask from a woman who in the song “212” raps the line, “I guess that (vulgarity describing female body part) is gettin’ eaten!”

Of course, it cuts both ways.

Maybe Sarah can find a less less incendiary way to channel her rhetorical passions, too.

Sarah and the Zombies