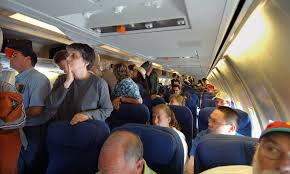 Flying commercial always makes me feel like a foot must feel when it’s getting shoved into a bowling shoe.
I tweeted that last week and was immediately corrected by Jim H., one of my old Nashville Banner buddies, who said I was being too kind.
A more accurate description, he said, would be it feels like a right foot getting crammed into some left shoe with somebody else’s stinking foot already inside it.
Bingo.
That our national air carriers can turn an endeavor involving transporting human beings 32,000 feet above the earth’s surface into something so perfectly pedestrian is a towering tribute to oxymoronic grandeur.
I last week flew from Pittsburgh-to-Chicago-to-Omaha then Omaha-to-Charlotte-to-Pittsburgh.
That's a lot of airtime for a guy once prone to airplane panic attacks.
It wasn’t the prospect of flying that disturbed me. No, it was the prospect of flying inside an airplane that did.
I’m sure I’d be more comfortable strapped right to the wing.
Who wouldn’t?
Honest. I’ve flown in hot air balloons and open-cockpit bi-wing stunt planes. I’ve twice gone skydiving and once took the controls of a 330 horsepower Extra 330LCs aerial stunt plane.
And the thing was way up in the sky when I did!
Yet from about 2001 through 2010 I used to have low-grade panic attacks on planes.
They had nothing to do with 9/11.
Instead, they had everything to do with a pre-9/11 Wall St. Journal story I saw about passengers on a Northwest Flight who due to heavy snows were marooned on the tarmac for 11 hours. That’s eleven.
The richly-detailed story told how the passengers were just 50 yards from the terminal gate, yet no assistance could be rendered. The toilets backed up, babies were screaming, fights between passengers and crew erupted.
Worse, they run out of booze!
Imagine the cruel deprivation, the stink, the claustrophobia.
I remember reading the epic story and thinking, “Man, if that ever happens to me I’ll go out of my mind.”
Of course, it happened my very next flight.
It lasted “only” four hours, but when you’re in the middle of it you don’t know how long it could last. Worse, the pilot would come on the intercom every 15 minutes and say it’d be just another 15 minutes.
They did that for four hours.
I had the middle seat between two barnstorming Sumo wrestlers. Just one fart and we’d all be goners. I remember breaking out in a cold sweat.
A storm had re-routed my NYC direct flight through Cleveland. I could look out my window and see Interstate 90 that led to Detroit.
By coincidence I’d in fewer than 12 hours be right there. My buddies and I had tickets to the Pirates inter-league series against the Tigers. I knew I could have arranged an easy rendezvous to spare me from my purgatory.
But they wouldn’t let me leave. The flight attendant, bless her heart, was very understanding. She let me stand up near the cockpit, dabbed me with damp towels and coached me to breath like she thought I was about to go into labor.
I had a rough stretch flying after that. I tried boozing, home-remedy relaxation techniques and talking about my problem to wary seatmates.
Nothing worked. I still on every flight felt like running up and down the narrow aisle until I could find a place to eject from the tubular prison.
I was finally able to beat it with something so simple I’m surprised I’d never heard counseled.
I immersed myself in a really good book.
I was flying from Houston and in the airport picked up Adam Hochschild’s fine “To End All Wars,” about World War I, one of the most miserable epochs in human history.
I think it helps me when I’m feeling sorry for myself to read about other hapless bastards who’ve had it way worse.
WWI soldiers had it so awful. They were trapped in tightly confined spaces with the constant threat of mortal harm. There were poison gases, endless dread and unceasing torments.
I know what you’re thinking.
Sounds like your typical commercial flight.
I must be thinking of a different book.

Related . . .
Vegas: Sore from soaring in stunt planes
Plane truths from a real road warrior
“Look, ma! No hands!” a pilot’s story
Planes should have horns to honk
Let kids land all the planes!
We  … all … need … some … space