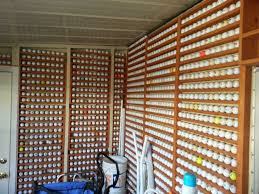 “I just pray to God I die before he does,” she said with the utmost sincerity.
The golf ball collection nearly consumed their entire house. She had no idea how she was going to dispose of the enormous collection without it swamping her remaining years.
I told her she ought to think about becoming an avid golfer.
Not a good golfer, mind you. Just an avid one, one who played a lot and sprayed golf balls all over creation.
Like me!
I thought of that forlorn woman Sunday when I was going through Dad’s old golf ball collection.
He died in 2004, but his collection of more than 500 logo balls from all over North America remained in his room with about 100 of the most prestigious ones on a custom made display.
There’d been no need to dispose of it, but now we’re making plans to move my Mom out of there so I’m going through all the stuff that was too meager to sell, but too substantial to dump.
They’re something odd to every one else about any kind of collection.
As a former National Enquirer reporter, I’ve probably seen more than most.
I’ve written stories about people who collected colossal numbers of ashtrays, snow globes, matchbooks, shrunken heads, coins, stamps, guitar picks, Pez dispensers, lunch boxes, locks of celebrity hair, lighters, neckties — you name it.
Beer cans?
I did a story about a Houston guy who built an entire house of old beer cans he’d drunk himself.
It was a big house and he was a very big guy.
I used to have a lot of vinyl record albums, but those were replaced by CDs and now digital. I have 8,709 songs from 949 albums but thanks to soulless miniaturization they’re contained on a device no bigger than a deck of cards.
Songs are now marketed in a way that one of the things that matters most to me — music — will be easily disposed of by another — my surviving children.
It’s different with books, which I doubt I’ll ever read digitally. I have about 300 books at home. I’d have more — I love books — but I can’t let the collection sprawl beyond the family basement room.
Dad never said what he wanted me to do with all his golf balls he’d bequeath.
I’d gone to Mom’s on Sunday to clean up crap and got diverted by golf memories. Besides all those balls, there were also a lot of photo albums from Myrtle Beach golf trips with Dad and all our buddies.
So many pictures reminding me of so many good times.
Those I’m keeping.
What will I do with all the balls that once meant so much to the Old Man?
I’ll pollute the planet.
I’ll one-by-one scatter them in lakes, streams, woods and other once-pristine eco-systems that have become area golf courses.
Yes, I’ll golf ‘em till they’re all gone.
I could lose a ball for each hole for the next 27 consecutive rounds — it’s entirely possible — and still have some left over until I had to play more carefully.
Fat chance of that ever happening.
When it comes to golf balls, I’ll always be more hitter than hoarder.
And that’s they way it’s always going to be.
I know of a nearby big box sporting goods store that’ll never run out.
Yes, I can always find balls at Dick’s.