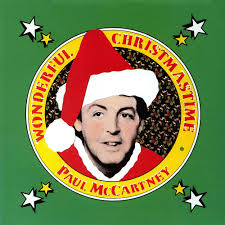 A 1979 song Paul McCartney wrote in one afternoon will again earn him more than $400,000 this year for a cumulative total of more than $15 million.
Yes, for Sir Paul it’s always a “Wonderful Christmastime.”
By contrast, this will be the 1,542 blog post I’ve written since 2007, a steadfast tally that’s earned me exactly $102 in supportive donations.
“Wonderful Christmastime” is controversial around the Rodell family dinner table — and if that statement has you concluding dinner conversation at my table ain’t exactly a Bill Maher roundtable, you’re correct.
It’s usually just the four of us sitting around listening to Christmas music, discussing our days and trying to guess who it was that just farted.
I’m kidding.
I’m the only one who farts.
But conversation gets pointed when McCartney’s “Wonderful Christmastime” comes on.
I find it pleasant enough, but Val hates it. And she says that nearly every time it comes on.
“I hate this song,” she says. “It’s just so annoying.”
I don’t love it, but I always admonish her for her viciousness toward something so innocuous as a little Christmas ditty.
I save my hatred for true evil. Things like ISIL, injustice and Roger Goodell.
It is surprising to me how some songs about our most joyful holiday can be so divisive.
The Wikipedia entry on the song says many consider it one of Paul’s poorest compositions and quotes Beatles author Robert Rodriguez as saying, “Love it or hate it, few songs within the McCartney oeuvre have provoked such strong reactions.”
C’mon! It’s a Christmas song!
If we as a people allow Christmas carols to divide us, how will we ever remain united when we decide on some distant day that maybe — maybe — it’s time to thoughtfully and with open minds discuss things like how to decrease gun violence?
Even if you don’t like the melody, there is much to admire about the tune.
It’s catchy. It’s simple. Its run time doesn’t exceed 4 minutes. The lyrics include “ding dong ding dong ding dong dong ding.” And “ooo ooo ooo toot toot toot toot toot.”
Here’s something you probably didn’t know: The track personnel is listed as follows …
Vocals: Paul McCartney
Guitar: Paul McCartney
Bass: Paul McCartney
Keyboards: Paul McCartney
Drums: Paul McCartney
Percussion: Paul McCartney
I guess Paul McCartney worried just calling it “The Paul McCartney Band” would have come across as too pretentious.
I love Paul. He’s my second favorite Beatle behind George and while I wish no ill on anyone, I hope for the sake of our collective cool we never refer to Ringo as “the last surviving Beatle.”
“Hey Jude,” “Yesterday,” “Let It Be,” “Live and Let Die” — Paul’s songs are indelible.
He’s reportedly worth in excess of $660 million, which is just shy of the Gross National Product of the nation of Guam, pop. 165,124.
And, geez, a $15 million drop of that bucket comes from a song many tasteful listeners despise, a throwaway that probably took him less time to write than it takes me to sort the weekly recyclables.
In fact, I probably took more care in crafting this stupid little Monday morning blog than the great Sir Paul did in the entire composition of “Wonderful Christmastime.” For that he gets $15 million.
And I get squat.
No dough. No recognition.
My wife’s right.
That song is just so fucking annoying!