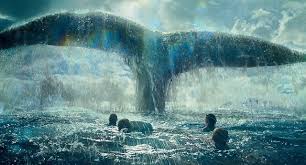 When I heard the movie was being released, I got super excited. I marked the date on the calendar and told my wife to get her costume ready.
“Star Wars?”
Nope.
Sure, we’ll see it, but I’m baffled by the multitudes who are treating “Star Wars” like it’s “Resurrection II,” a can’t-miss blockbuster starring, I guess, Christian Bale —  if casting guy named Christian to play Christ isn’t too obvious.
I’m talking about “In the Heart of the Sea,” the Ron Howard movie about one of my favorite books that is about one one of my favorite books. The Pittsburgh-born Nathaniel Philbrick’s 2000 book is a dandy.
I’d never known “Moby-Dick” was based on the factual and horrific story of the Nantucket whaleship Essex which in 1821 was sunk by a vengeful sperm whale.
The catastrophic sinking threw the captain and 20 crew into three 25-foot whale boats in the middle of the Pacific Ocean about 2,000 miles from the nearest land mass.
The wreck left them adrift without any rational hope of salvation.
The men were stranded 95 days and endured horrific ordeals of having to drink their own urine and consume their dead shipmates’ bodies down to the bones to survive.
The perfect date movie!
Of course, now many of you know the movie is a huge bomb. Critics are saying the movie about the sinking of the Essex is the biggest disaster since, well, the sinking of the Essex.
So I couldn’t make my wife go. She’d hate it.
It was the perfect guy movie, sure, but trying to get 3, 4 or 5 guys together to see a real guy movie involves so many whiny logistics it always makes me ashamed to even admit I’m a real guy.
So there was only one thing left to do.
It was time to snag me some strange.
“Strange” is what some crass men used to call an intimate encounter with an unfamiliar woman.
That wouldn’t do for me.
I needed real strange. Huge strange. That only meant one thing.
I took Mom.
They don’t come any stranger than her.
She turns 83 on Saturday, but don’t quiz her on it.
She’s been spiraling downhill for five years for now. Her memory is shot.
It’s a pity. Her vibrant sense of humor always reminds me of what would happen if Carol Burnett and Ellen DeGeneres brainstormed to create themselves a fairy godmother.
I’ve had people tell me that when their loved ones succumbed to dementia, they swapped personalities; nice ones became mean and vice versa.
Given her innate joyfulness, I feared she might become a real whopper of a bitch, but that’s not happened.
If anything she’s become even sweeter, often cloyingly so. Everything is beautiful! The world is perfect! People are wonderful!
She makes Fred Rogers seem like Grumpy Cat.
It usually drives me to fits of sarcastic correction, but as I’d spent the previous evening watching the Republican presidential debate, I figured an afternoon with her would restore some soulful balance to the universe.
And it was kind of a test. Her TV is never off, but the channel is always changing. Her watching TV always reminds me of the part of “The Price Is Right” where they spin the big wheel only with Mom the wheel spins for eternity.
I wanted to see if she could actually sit through a feature movie, if she could absorb any of the plot. Who knows? It might be a fun escape and an entertaining new way for us to spend time together.
I did enjoy the movie. The story was compelling, the action first-rate and the scenes involving gruesome shipmate cannibalism were handled in a way I guess you could call “tasteful.”
And Mom seemed to like it, too. She didn’t fidget or talk or try and strike up any distracting friendships with fellow movie-goers. She just just spent two full hours staring straight at the screen.
As we strolled out to the car, I asked what she thought.
“I thought it was great!”
I asked what part she found most memorable.
She asked me to remind her what it was about.
I told her it was about fishing.
“What else?”
Boats.
“What else?”
The warm fellowship that comes from dining together.
“Oh.”
I asked if there was anything at all she remembered about the movie she’d seen just moments before.
“I thought Tom Cruise was great!”
Unless Cruise was acting like an 85-foot CGI whale, I don't think he was in the film.
We’re taking the steps to move her from the South Hills condo she’s called home since ’98 to a place nearer to us. I worry about the consequences of my decisions
I can’t shake the feeling that things are adrift with no rational hope of salvation.
I just can’t tell if the one drifting is me or Mom.

Related . . .
Dickin’ ‘round with Moby & other whales
How to kill your mother (with love)
Mom’s making crazy contagious by a nose
A son’s Mother’s Day lament
A stiff tribute to Mom’s and cadavers
Mom’s coming to my Lebo book signing