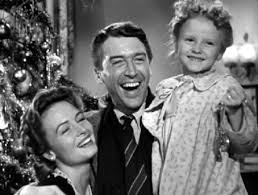 It is my patriotic conviction no one in America should be allowed to see “Star Wars: The Force Awakens” until everyone can prove they’ve seen “It’s A Wonderful Life.
It’s that important to our national well-being.
I’m dumbfounded over how many people haven’t seen our most essential Christmas classic.
It is, I guess, understandable for younger generations. They’re subjected to too many techie distractions, are reluctant to engage programs older than “SpongeBob,” and many are unfairly burdened by moronic parents.
But, c’mon, everyone over 40 should have by now seen it and should make time each Christmas to see it again and again.
Why?
Because watching it makes everyone feel better about themselves. The message — that every life has enormous worth — is one that needs constant reinforcing.
And it’s just perfectly entertaining. It’s funny. It’s sentimental. And it gives us heterosexual men our annual opportunity to fall in love with Donna Reed all over again.
I practice what I preach.
I was appalled when I learned a 45-year-old friend of mine had never seen it.
“Okay, that’s it,” I said. “You’re calling in sick this afternoon. You and I are going so spend the afternoon getting drunk and watching ‘It’s a Wonderful Life.’”
Oh, he demurred, I can’t. I’m too busy.
“You have to! You can’t go another minute without seeing this movie!”
He said people were counting on him. His job was too important. And getting drunk in the middle of the weekday was irresponsible …
Blah, blah, blah.
When did they stop putting auto pilots in commercial jet liners?
It’s that important to me.
So, by all means, be sure you watch the movie on Christmas Eve, 8 p.m., on NBC.
Or how about this?
Wait until next year and join us on our annual holiday pilgrimage to The Jimmy Stewart Museum in the actor’s native Indiana, Pennsylvania.
We were there Saturday. We go every year.
The museum is wonderful. Stewart is indelibly linked to George Bailey and vice versa. As Stewart was a Boy Scout, a war hero, a father and consummate gentleman, it was the best typecasting since “Wizard of Oz” producers cast a dog named Toto to play a dog named Toto.
Best part? The museum includes a cozy theater that throughout the year matinees “Harvey,” “Rear Window,” “The Man Who Shot Liberty Valance” and other famous Stewart films. At Christmas, of course, the feature is “It’s a Wonderful Life.”
We don’t stay for the whole thing (that’s for Christmas Eve at home), usually just to the honeymoon scene.
This is the year we’ll remember because the audience included a woman who we think must have escaped from the local lunatic asylum.
We deduce that because she laughed hysterically at even the most mild laugh lines.
She roared when George was shopping for luggage, she cackled when Harry Bailey was carrying plates on his head, and when the floor to the pool opened up she laughed so hard we thought the building would collapse.
It was excessive and we figured the woman, about 40, was probably nuts.
Or maybe she was just one of those perfectly nice and joyful people, the kind of person you’d imagine Jimmy Stewart was all the time.
Either way, it’s pretty clear she’s the kind of person who won’t cut in line, ruin your day with road ragery or cause a nasty Facebook fight over pointless political differences.
For those reasons alone, I hope she carries the movie’s message with her throughout her every day for as long as she lives.
I hope she wakes up realizing her joyful exuberance is making a difference throughout the world, that she is an inspiration to those who struggle and that by finding happiness in even little things, she is making everything better.
Because she matters. A lot.
We all do.
Because it’s a wonderful life.
It’s a pretty darn good movie, too

Related . . .
“The Jimmy Stewart Museum,” an MSNBC travel story of mine
Christmas book sales and what I sign
“That’s my steak, Valence.”
Faking your death to lure Christmas guests
Whole world needs to LOL right now
Read this then go straight to sleep