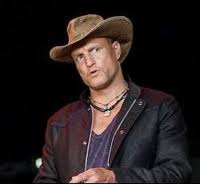 Didn’t see HBO’s “Game Change” because we don’t have HBO. Would have rushed to order it if any of the show promos had hinted it included Woody Harrelson playing a character based on Woody Harrelson.

I’ve read enough profiles of him recently to understand shows depicting Woody being Woody would be better than most of the movies starring alleged A-list actors who command far more respect than the B-list actor who got his start on “Cheers” playing a guy named Woody.

Better is any role that has Woody playing an exaggerated version of himself.

That’s what happens in “Zombieland,” and “The Messenger,” two of the finest movies we’ve seen in the past two years.

In both, Woody plays over-the-top, more hick and cartoonish versions of himself with out-of-control rage issues.

And when I say a cartoonish version of himself, I’m talking Yosemite Sam.

That’s exactly who he acts like in the peerless zomcom “Zombieland” from 2009. In it Harrelson plays a dim, but ultimately sweet redneck who slays hordes of blood slobbering zombies for fun and survival.

We recently rented the outstanding Harrelson drama “The Messenger,” also from 2009, about the U.S. Army details obliged to inform parents and spouses of the death of loved ones fighting overseas. In it Harrelson plays a dim, but ultimately sweet redneck who wrestles with the morality of war and getting drunk.

He was acclaimed, too, for his role in 2007’s “No Country for Old Men,” in which he plays a dim, but ultimately sweet redneck bounty hunter who fails to persuade a more lethal bounty hunter with a Moe Howard haircut to, please, not shoot him.

He has what seems to be a non-Woody role in the ballyhooed new movie, “The Hunger Games,” so we’ll probably skip that and look forward to the rumored sequel to “Zombieland,” in which he reprises, well, you can figure it out.

We’ve done our share of enriching Hollywood the last couple of months. Here’s my jiffy little critique of what we’ve seen in theaters and at home. I’m ranking them on a scale of how many Woodys they’d need to make them perfect (zero Woodys, perfect; five Woodys unwatchable).

• “Safe House,” starring Denzel Washington -- Another fine performance by the great Denzel, but the movie suffers from obnoxious camera technique favored by directors too lazy to set up real action shots. Yes, it was the Drunken Camera Man School of Filmmaking. Too many of the too many action films are slapped together this haphazardly. Three Woodys.

• “The Lorax” -- We are in the Golden Age of kiddie movies, but the Seuss movies, to me, don’t work. The art is lavish, the stories slim. The perfect Seuss template remains the 24-minute version of “The Grinch that Stole Christmas.” Four Woodys.

• “Arrietty” -- Another one with the kiddos, this one very sweet and tender. It was unhurried, the artwork sumptuous. I thought it might be too slow for my girls, but they loved it. Not a classic, but we’ll watch it again. It’s nice to see movies made that show kids not all stories are spastic. One Woody.

• “Rise of the Planet of the Apes,” -- This was fantastic. Great campy fun. And the computer-generated action-sequences of the monkeys run amok is mesmerizing. One Woody.

• “Bridesmaids” -- This was a critically acclaimed box office smash that both Val and I hated, me more than her. It’s from the Judd Apatow school of gross-out comedy. Its success means we’re going to be inundated with more of it in watered down forms. Five Woodys.

• “Breaking Bad” -- Not a movie, per se, but we’ve spent more than 45 hours the past three months catching up on seasons 1-3 of this AMC drama about a high school chemistry teacher who turns to meth cooking to provide for his family after he’s diagnosed with terminal cancer. Better than “The Sopranos,” this is the most entertaining show we’ve ever watched. 1/2 Woody.

“Breaking Bad” is near perfect, but there’s nothing in the whole wide world that couldn’t be improved with a little Woody.