Return of the panic attacks 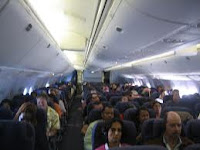 Lewis Grizzard, the late, great Southern humorist, used to say he belonged to a no-fly club. Their motto:

I wholeheartedly support the sentiment without practicing it.

But I thought long and hard about getting all gooned up for a long flight from Houston to Pittsburgh Sunday night.

I thought it might help me from succumbing to a panic attack, something that hadn’t happened in almost 10 years.

I have no fear of flying. I’ve flown in hot air balloons, bi-planes, stunt jets, have twice gone skydiving and once leaned out the open cargo bay deck while tethered to a C-45 military mule that was cruising at 10,000 feet.

It was all very cool, as I like to think I am.

In that regard, my panic attacks make perfect sense.

Few people recall it, but one of the biggest news stories of the summer of 2001 was the congressional consideration of a passenger bill of rights.

The flying public was fed-up.

Exhibit A in the necessity of the legislation was a Northwest Airline flight from, I think, Detroit.

I vividly remember reading all about it in a front page story from the Wall Street Journal. It told in painstaking detail what happened on the flight where weather delays necessitated passengers be held captive on the tarmac. This one lasted nine hours.

There’s no explaining the irrational mind of man.

I made the mistake of reading every word of the story and thinking, man, if that ever happens to me I’ll go right out of my mind.

This seemed unlikely because it seemed to herald a tipping point where everyone agreed, enough’s enough, this must never happen again.

You may not remember it because of another big news story that swept it from the front pages.

That was 9/11, the day when passenger rights instantly became a quaint notion of bygone days.

Of course, you can by now guess what happened to me on my first post-9/11 flight.

Dangerous weather diverted my New York to Pittsburgh flight to Cleveland. Every 15 minutes, the pilot came on and updated us that we’d soon be on our way.

We were stuck there four hours.

I can tell you from personal experience that a jail cell is less confining than coach seats on a 737. In a jail cell, you can at least get up and pace.

In a typical jetliner, you can’t move even an inch. The feeling becomes more acute when the plane isn’t going anywhere either.

It began with a cold sweat and an overwhelming need to get up and run. I felt as if I’d been sealed in a great big coffin. I knew once the plane got rolling, I’d be fine, but I felt if I remained in that middle seat I’d go out of my mind.

Here’s another thing: There’s an utter lack of humanity on commercial flights. No one jokes. Few are civil. It’s oppressive, as is the entire air travel experience.

Looking back I wonder if one of the triggers may have been I-90.

I could practically see it from my seat. The very next day my buddies and I had planned to drive to Detroit to catch some baseball games. I knew if I could just get off that plane I could arrange for them to pick me up on the way. My unjust incarceration would be over.

I finally bolted from my seat and confided to the flight attendant I was coming unglued.

Well, she couldn’t have been nicer if she’d have pulled my head to her breast and told me to call her Mommy.

“A lot of people have been having strange reactions since 9/11,” she said.

She gave me a cool, damp towel to put on my neck and let me stand there near the open door. Just seeing access to escape soothed me. The panic passed.

But once I’d experienced it, I became hyper-aware it could happen again. And it did. Two more flights in the next six months experienced delays, one of them for two hours while they fixed a stupid Julia Roberts movie that wouldn’t play.

I’ve hated Julia ever since.

Somehow, I made peace with the discomforts of flight and have been what passes for normal for the last decade.

So none of that was on my mind as I strapped into my aisle seat for last week’s flight to Houston. As I settled in, I noticed that the guys in the middle seat beside and behind me were buddies.

“Here, you guys are friends. Take my seat,” I offered.

What a great guy! They were very appreciative at my generosity.

Had I surveilled the seats previous to opening my mouth, I never would have made the offer.

Occupying the aisle and window were two enormous stoics. They didn’t nod at me or acknowledge a fellow human being would be practically in their lap for the next three hours. I began feeling the stirrings of the old panic.

It built for over a minute before I said enough. I told the guy I’d changed my mind. I needed my aisle seat back. Pronto.

The sudden retraction of my offer baffled them. I didn’t care.

There’s no explaining this irrational mind of mine.

The return flight was sober and uneventful. I had an aisle seat and a slender female next to me who smiled when I sat down and engaged in pleasantries.

So it seems the requirements for guys like me to fly are an aisle seat, on-time flights and petite seat mates who look like they might hold my hand if I start feeling odd agitations.

My fear is the airlines might read this and realize a good percentage of their customers would pay extra for these kinds of civilities that should be common practice.

Maybe I should think about hiring a skinny hooker to fly with me next time.

I remember (vaguely) how exciting it used to be to get on an aero plane and fly somewhere, every need attended by a gaggle of flight attendants (we called stewardesses back then). But I've despised flying and airlines in general for many years now, much the same way I despise working with banks for any reason and banks in general.

My problem: I need money and plane transportation to go the places I want to go.

Maybe we can halfsies on the skinny hooker.

Amen, Keith. We can have the hooker sit in the middle seat. Thanks!