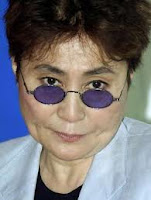 I’ve for better than three months been engaged in a tawdry process that always leaves me feeling small. Yet its pull is irresistible.

Yes, I’m trying to goad Yoko into saying something stupid.

This goes contrary to my every instinct to help and encourage people who are helping and encouraging people.

That’s what Yoko does. In fact, that’s all she does. One of the richest women in the world, she sits in her lavish Manhattan condo and issues ethereal pronouncements that would be New Agey if they hadn’t predated New Age by four decades.

Example: “You are water. I am water. We’re all water in different containers. That’s why it’s so easy to meet. Someday we’ll all evaporate together.”

Or, “You can assemble a painting with a person in the North Pole over the phone, like playing chess.”

It’s the kind of thing that inspired people to say WTF before anyone understood what WTF meant.

I became aware of this about four months ago when I wrote this post about the legacies of John Lennon and Paul McCartney, with me coming down firmly on Paul’s side.

I used as part of my argument that Paul was superior simply because he didn’t marry Yoko. In fact, like the rest of the world he disdained her. Disdained her art, her poetry, her unlistenable music and the fact that she’s based her entire life on being a martyred widow.

I’ve never had the visceral hatred for Yoko, 79, that others have. I had a friend when I lived in Nashville who hated her the way Rick Santorum hates things like condoms.

I asked him how he could hate someone so non-violent.

“Non-violent? She murdered The Beatles,” he countered.

He started a list the night Lennon was shot and called it, “People they should have shot instead of John Lennon.”

Through the years the list got sillier and sillier and included people no one would have dreamed of shooting like the guy who invented New Coke and a kicker for the Detroit Lions whose feckless right foot cost him a small fortune in wagers.

At the very top of the list was Yoko.

I abhor violence and the promotion of it, but remain friends with that guy because he’s just an awful lot of fun. And the historical what-if of my friend’s list does tantalize.

My fanciful speculation was John would have run straight into the arms of Adrienne Barbeau, The Beatles would have reunited and the scourge of hip hop would have been postponed for 20 years.

Still, I wouldn’t have engaged in my bitter little battle had I not begun plumbing the social media and discovered Yoko has more than 2 million followers on Facebook and Twitter.

They seek her wisdoms and approval every Friday when she solicits questions that read like they could have come straight from the crayon-scrawled walls of the insane asylum.

Q: “What is the answer to this question I have asked myself daily: ‘Am I here?’”

Yoko: All of us are here as long as we can question it.

Q: “What do you do when you feel so sad that you just can’t stop tearing?”

Yoko: Tearing is an excellent way of bringing balance and health to your mind and body. Keep tearing!

It wouldn’t be so bad if it was restricted to that sort of silly hippie fluff. But, no, she gives serious advice on things like job searches, marital disputes and health. She advised a woman wrestling with anorexia to take up jogging.

It seemed so ripe for ridicule I felt compelled to engage. I began submitting questions to #askyokoQandA in the hopes she’ll respond and I can expose the fraud.

I submitted, among others, the following:

• “How can I learn to use air as my security blanket?”

• “Will heaven have vending machines and if, yes, what will they dispense?”

• And, “If our bodies are indeed temples, then how come everything that comes out of them is so disgusting?”

Now far be it for me, a rarely-sober slouch who resides in a make-believe world of blogger irrelevance, to admonish anyone about offering free advice to distressed strangers but it just galls me.

Yet, I can’t help myself. And with each petty tweet I feel myself increasingly diminished.

I’m adding soulless negativity to a woman whose very website, www.imaginepeace.com, conveys so much of what I believe.

Are my own personal and professional failings karmic comeuppance for my mean-spirited goading? Rather than taunt, should I embrace the wisdoms of Yoko for spiritual fulfillment?

And what about those heavenly vending machines? Do they require exact change?

My fifteen minutes! I once shared a British Airways plane across the Atlantic with Yoko Ono. She sat a little closer to the front than I did, but I ran into her when she came to the galley asking for a banana. She also seemed a little confused by the concept of a bus taking passengers from plane to gate at Heathrow, and had to hold on to someone who was tall enough to reach hanging strap by himself.

A banana! Too bad it wasn't a plum. Great story, H.H. Love the thought of her mystified by a commuter bus. I'm surprised you didn't tail her. Thanks!

I was doing work at the Newtopian Embassy before and after I saw you at my wedding. I thought you knew.
I did get to meet and work with her
as well as spend a time experiencing Her home,offices in the Dakota and Archive storage. She is the real deal.
I think you would like her,She is much more than a famous widow,and target of hostility, just as her husband was more than a misunderstood celebrity.
Their kid was about the age we were when you and I met,when I met her, he had just moved out of Mom's and gotten his own place.
I'm sure our Moms were worried about how we took care of ourselves, same thing, except his Dad was shot down in front of the house.
I think there is a lot of wisdom from Yoko, most of it confusing and profound, but that's not her fault.
You can take advantage of something Yoko will never know, anonymity.

Thank you, Brian. I do recall you saying you worked with her, but was foggy with details. That must have been very cool.

I'll try and be less harsh on her. Your perspective will make that easier. Maybe she shouldn't be such a reflexive punchline.

Always great to hear from you.