Imagining a planet at peace 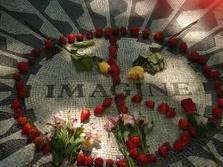 First of all, there’d be no more talk radio. Everyone would have to raise their hands and be recognized before they spoke.
We’d all make eye contact with one another as we strolled down the sidewalks. We’d give little, “Hey, you hang in there” nods of encouragement to everyone we came across to let each other know we’re all in this together.
If we saw someone driving like a maniac, instead of getting enraged at the reckless incivility, we’d all pull over assuming the driver was on the way to the hospital to help deliver triplets.
And that’s exactly what he’d be doing.
Baseball would be more popular.
I woke up today with an impulse to join the shrill fray and give my redundant opinions on who’s to blame, what should be done, and how anyone with any sense saw this tragedy coming.
But the thought fatigues. Like everyone else who opines -- and there’ll be a lot less opining on a peaceful planet -- I’ve already done plenty of that.
I’ve written about the problems with solutions ranging from the silly to the serious.
So I just wondered when any of us is ever going to get a break and just what that would be like.
The only ones who felt obliged to work more than seven months a year would be the ones running all the ice cream stands.
There’d be a lot more hammocks and time to enjoy them.
We’d all play a lot more golf on courses that never got too crowded and never cost more than $29. And when we were done we’d sit and laugh and joke for hours on pleasant porches and still make it home in time for dinner with families that never fight.
We’d read more and instead of talking about politics, we’d talk about the books we enjoyed.
TVs would still be big and hi-def, but there’d only about 40 channels.
Being liked and respected by the dozens of people who really know you would mean more than being famous to millions who don’t.
We’d play more games involving processed wood than games involving batteries and LED screens. All the best games -- chess, checkers, Jenga, Scrabble, blocks -- never need recharging.
We’d be more tolerant of the harmless eccentrics and we’d all agree it’s best that the real crazies shouldn’t be allowed to purchase deadly weapons with fewer restrictions than sane people face purchasing a keg of beer.
And little 9-year-old girls born on days renown for tragedy would grow up to do things so heroic and magnificent we’d all sit around and wonder at the irony that a girl born on September 11, 2001, was part of a generation that ushered in an era of peace on a planet that had been forever riven by violence.
I saw John Green, father of Christina Green, today talking about the death of his daughter. He spoke of his devastation and then surprised me by saying, “It shouldn’t happen in this country or anywhere else, but in a free society, we are going to be subjected to people like this. I prefer this to the alternative.”
It’s a stunning, oh, well, reaction to a loss from which he’ll likely never recover.
He’s saying we are all consigned to live in a violent world overrun by the senseless slaughter of innocents. It’s been that way since just after Eden and that’s the way it’ll always be.
But it won’t be that way in a peaceful world. There won’t be traffic, bedbugs, hunger, despair, loneliness or madmen bent on murder. There won’t be evil, there won’t be heartache and there won’t be tears.
So I guess in a truly peaceful world the biggest difference is there won’t be people.
Of course, the grief-stricken father’s correct. It’s never going to get any better.
We just have to hope it does.
Posted by Chris Rodell at 2:02 PM