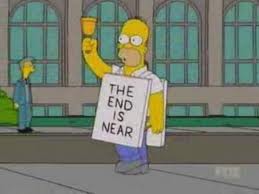 Looks like anyone who purchased for full price a 2011 calendar paid twice too much. A group of Christians is making news for pinpointing the exact end of days.
Mark your calendars. It’s May 21.
The precision of the date was determined by Christian broadcaster Harold Camping, the 89-year-old leader of the Oakland, California, based Family Radio Network.
His calculations are based on thorough Biblical readings and external factors such as the 1948 founding of Israel.
And you had to figure the Jews would have something to do with it.
“Beyond the shadow of a doubt, May 21 will be the date of the Rapture and the day of judgement,” Camping says.
If Camping is correct then, according to Rapture believers, all the most devout Christians will be magically whisked to heaven while the rest of us face times of deadly upheaval.
Well, good riddance.
Tea Party morons will have lost their greatest constituency, the “God Hates Fags!" crowd won’t be around to torment soldiers’ funerals, and Rush Limbaugh will have so few listeners he’ll be relegated to a static-filled backwater AM channels.
Yes, Rush’s listeners may be going to heaven, but he’s not going anywhere.
I’d love to see how the rest of us could do on solving problems like the spread of AIDS and global warming without having meddling Christians around to tell us things like condoms and compact fluorescent light bulbs are the devil’s playthings.
We could enact some common sense gun laws, build temples devoted to ecumenical peace near Ground Zero and -- who knows? -- maybe even persuade Simon Cowell to return and save “American Idol.”
For me, hating Christians is an act of self-loathing because I’ve always considered myself one.
Yes, I think I’m one of the baptized good guys. I kneel down and pray to God and Jesus every night. I do unto others as I’d have them do unto me. It’s my faith and I revere essential Christian tenets of love and forgiveness.
But guys like me don’t make the true Christian cut because we entertain the cosmic possibility that just maybe we’re wrong.
We can believe, but we cannot know.
That’s why three of my favorite musings on the subject of religion are firmly secular thoughts from a trio of monumental men.
The first is from Thomas Jefferson who said, “Question with boldness even the existence of God; because if there is one, He must more approve of the homage to reason than that of blindfolded fear.”
Then there’s this from Henry David Thoreau who on his deathbed was asked if he’d made his peace with the Lord. Thoreau’s sublime response: “We’ve never quarreled.”
The third is from my late grandfather who shortly before his death at 98 said he was hoping he’d get to meet God to ask him, “Now, I know you created heaven and earth, but who or what created you?”
A heaven with the Christians who say they can divine things like when God plans to flip the big “off” switch is a heaven I do not wish to attend.
All the people will have the same boring haircuts. They’ll say the same sanctimonious things. They’ll be Dallas Cowboy fans. They’ll still find reasons to think they’re superior to other less pale Christians.
I’ve been to parties like that and they seemed to last an eternity.
I cannot begin to fathom how long an actual eternity like that would seem.
So, go ahead, you true believers, and rise up to your exclusionary stick-up-the-ass heaven, the one that will make lilly white places like Augusta National seem diverse and hip.
I’m staying here with my friends, the ones who like to drink, smoke, swear and screw.
Sure, if Camping and his followers are correct we may be in for some historically tough times.
But we’ll give it hell.
And in many ways, that will seem like a heavenly alternative to what the most devout Christians have always had to offer.
Posted by Chris Rodell at 11:42 AM

And once again, I laughed until I had to wipe tears away more than once. Love the 3 quotes.

Oh man! That made me laugh so hard I actually snorted. My kids think I am losing my mind. I'm thinking about making copies of this and passing them out at church. :)

An interesting side note: Camping made a similar prediction during the 1990's, with the date for departure given as during that time period. I know this because I used to occasionally listen to his broadcasts then. The date came and went, everybody (more-or-less) was still here, and he continued broadcasting (albeit with egg on his face, and most of his broadcasts, for quite a while, spent both backtracking and arguing with pissed off callers who presumably had cashed in their life insurance.)

You know, it didn't dawn on me until later that it was the second in four posts that bashed Christians. Poor form on my account. But so glad you guys enjoyed it! It encourages me to bash them more often.

Fascinating fact there, Suldog. That's hilarious and worth monitoring. I hope I remember to check this out on May 22 -- if I'm still here.

I'm beside myself. So funny.