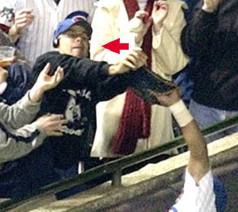 The football world is abuzz that Chicago Bears quarterback Jay Cutler exaggerated an injury and quit on his team.
It happened Sunday in the NFC Championship game against the victorious Green Bay Packers.
Only Jay Cutler knows if he’s a quitter.
But I can divine from the chatter who the losers are. They are the meatballs in Chicago and across the sports world who disparage the art of a really well-timed quit.
First, let’s begin by piling on distraught Chicago fans. I correctly predicted they’d never make it to the Super Bowl.
They’re fond of boasting about their toughness and how they’d never quit.
That’s true. They never quit whining.
My theory is the Windbag City will never win another championship until they make right with Steve Bartman.
He was a lifelong Cubs fan (and, thus, a likely mental defective) who is blamed for the Cubs losing the 2003 National League Championship Series after disrupting a potential foul ball out by Cubs outfielder Moises Alou.
It would have been the second out of the eighth inning of game 6. Instead, the opposing Florida Marlins went on to win with an assist by a misfielded ball by feckless Cub shortstop Alex Gonzalez.
Security had to escort him from Wrigley Field, he received death threats, since disgraced Illinois Governor Rod Blagojevich suggested he enter the witness protection program and Florida Governor Jeb Bush further enraged frosty Chicago fans by offering Bartman sunny asylum amidst the orange groves.
Bartman had to flee Chicago, his job and a life he loved. More than seven years later, the incident still galls.
In 2008, Alou, five years after it would have done any good, told the Associated Press: “You know the funny thing is, I never would have caught that ball anyway.”
Here’s a thought: Bartman should have quit being a Cubs fan long before the franchise set the standard for futility by going 102 years without a championship.
Cutler is now the target of similar scorn. Many players, in particular big mouth Deion Sanders, have said Cutler lacked heart and quit on his team.
I wish Sanders and others of his ilk would quit speaking into live microphones.
Quitting is underappreciated. Too many people keep going on and on when I wish they would have quit years and years ago.
I recently wrote about how Robert DeNiro should have quit in 1995 right after Martin Scorcese said, “Cut!” on “Casino.” Did you see his speech at the Golden Globes? It was a mumbling disgrace.
How about Rod Stewart? Has any artist done more to betray his musical legacy than Stewart has with this treacly cash grab that is known as the “Great American Songbook” saga, now in its, gadzooks, fifth volume.
He should have quit after 1989 and “Downbound Train,” or to be really safe, he should have quit the second someone approached him and said, “Rod, babe, we have this great song for you to record. This song will earn you industry-wide respect. It’s called, ‘Do Ya Think I’m Sexy.’”
The morons of professional football seem particularly enamored with the no-quit culture. They think men who play football are the toughest men on the planet.
They are confusing themselves with professional hockey players.
Want an example of a really tough guy who should have quit in 2006, which, coincidentally, was the first time he quit.
Brett Favre.
We won’t remember his records. We’ll only remember his graceless departure, er departures.
Muhammad Ali should have quit in 1975 after the Thrilla in Manilla.
The U.S. should have quit Vietnam in 1963 and Robert E. Lee should have quit at Gettysburg.
Me, I’ve quit so many things it’s like I’m always just getting started.
I’ve only had three adult jobs in my professional life -- and one of them was at the Pizza Hut.
I cold quit the others, one a newspaper in Nashville in 1989, the other a newspaper in Greensburg, Pa., in 1992.
Just up and quit.
With the exception of stability, prestige, regular income and peer respect, quitting two secure jobs has been a really swell career move.
I could go on, but there’s never been a better time to practice what I preach. It’s Friday and I’m counting down to Happy Hour.
Yep. It’s time to quit.
Try it sometime. It just feels so good.
Posted by Chris Rodell at 9:58 AM

I remember you as a snowman or some other character at a retail store some years ago.....Lon

Indeed. Poor Bartman! One of the most unfairly treated individuals of the 20th century.

Well, being from Denver I KNOW that Cutler is a quitter. Pansy-ass.

That said. The Rod Stewart "music" today make me sad. He definitely should've quit way back when. :)

Anon: True. I was a department store snowman over the holidays in 1982. Fun!

Suldog: I still get angry when I think about it. The guy looks like such a decent guy and a good baseball fan. And they ruined his life. They deserve to lose -- forever!

Tia: Yeah, Cutler's going to have to win it all to duck that label. Rod Stewart, however, is done. He'll forever be lame.