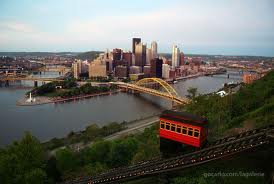 I was making phone small talk with an interview subject in Minnesota the other day. He said, alas, the Vikings stunk this year and good-naturedly concluded, “Oh, well, you can’t be good every year.”
I risked professional good will and retorted, “We can in Pittsburgh!”
It’s true. We’re about to play the New York Jets Sunday in what will be our 15th AFC Championship game since the leagues merged in 1970.
That’s astounding. I’ve been to nine of them. In that same span, the Steelers are an unprecedented 6-1 in Super Bowls.
This will be Pittsburgh’s fifth AFC Championship game in 10 years. Only the New England Patriots have done better, winning three Super Bowls.
But we can’t forget: they cheated. And admitted to it.
So I’m really excited about Sunday’s game and, in fact, about all the remaining teams. It’s a great and historic line-up of traditional teams. The Chicago Bears playing the Green Bay Packers is a monumental rivalry and Sunday marks the first time the two teams have met to go to the Super Bowl in 182 games.
The Jets have only won one Super Bowl, but everyone has to be impressed with what they’ve done to get to the championship round.
Plus, all four teams hail from cold-weather cities. That’s important because northern winters can be so nasty and our lives so meaningless and devoid of things like Speedos and beach volleyball, we need competitive football to get us through to spring.
It’s one of those short, busy weeks so I’m going to stop now.
But as I don’t want to short-change anyone who is counting on www.EightDaysToAmish.com to burn off at least four minutes of company time, I feel obliged to throw in an assortment of random thoughts and recent tweets.
Here ya go . . .
• The fact that only 70 people have signed up to follow my tweets @8days2amish doesn’t bother me a bit. For me, twitter is just a handy farm team for little lines that one day might grow up into full blog posts. For instance, it won’t happen with this next tweet, but it might with the one after.
• “I saw a man wearing a musical bellows on his chest during a recent chilly morning. He was dressed accordioningly.”
• “He was a great man, but does JP II really deserve sainthood? What'd he do besides act really popey?”
• Remember Andrew Gold? I heard his 1978 song “Thank You for Being a Friend” on satellite radio the other day. It reminded me of another one of his, “Lonely Boy.” I downloaded both of these tuneful songs and am delighted to have them in heavy rotation again. He was a rare two-hit wonder.
• “I nearly made the bad taste mistake in referring to the healing Gabby Giffords as "open-minded." Instead, wisely chose to use "even-handed.”
• “Soon, ‘dodged a bullet’ won't be a quaint phrase about evading a challenge, it'll be the answer to the question, ‘So, what'd you do today?’"
• “The sun, nearly 109 times the size of earth, is nothing but a big old space heater.”
• “It's unlikely to happen, but for reasons of proper English I'm urging all gardeners to begin describing themselves as petalphiles.”
• “Just once I'd like to hear news reports of a man being slain by a blunt instrument and learn the weapon was a tuba.”
• “New census says there are 308 million Americans. That means there should be at least 308 million-to-1 shots each and every day.”
• “There ought to be hangover parking just a few stalls down from handicapped parking. And there ought to be vendor selling Bloody Marys.”
• Feel free to visit here if you’re interested in reading my msnbc.com story about my quest to find the original, famous Ray’s Pizza in New York.
• Pittsburgh rapper Kellee Maize asked me to share with my readers her YouTube rap “City of Champions.” She somehow thinks mentioning her song on a blog with the word “Amish” in the title will somehow lead to notice I think she deserves. Poor kid. Still, I whole-heartedly recommend it. She’s all black ‘n’ gold ‘n’ blonde and I root for anyone who roots for the Steelers. And the video’s a love letter to great views of Pittsburgh.
• I thought about just cutting ‘n’ pasting the Ray’s Pizza story and passing it off as a blog post, something that would count against the 12 posts-a-month to which I aspire every lunar cycle. But I thought that would be cheating.
• Sort of like this tweet post only not as blatant.
Posted by Chris Rodell at 3:21 PM

hmm. i think i'll write a short story about someone being bludgeoned by a tuba. sounds fun! and hilarious.

also, it's possible for people to fit in tuba cases. but they can't really be taller than like 5'4.

Ah, the perfect crime. Plus with ominous musical accompaniment.

Saw your tweet about your first writer's conference. My advice: be a relaxed sort of brash. Speak up and don't be a wall flower. Good luck!

Should be a great game this weekend. It has been a fun ride this year, hasn't it?

Thanks, anonymous blogger! I can't discern your name, but I can tell you bleed Black 'n' Gold.

Go Steelers! (and thanks for reading!).