My goodness, a trip to NYC 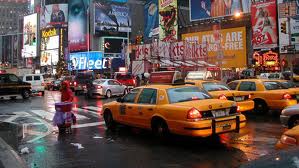 I’d loaded my bag into the trunk, slammed the lid and took one last look up at the house. A could see tears lining the eyes of the 10-year-old’s face as it gently pressed up against the window screen.
I could tell she was feeling an alien emotion. I was going to be gone for four days and she was surprised to learn might to miss me. As the lone male in the house with three gals, my role is to be the butt of jokes. And as soon as middle-age spread concludes its gutsy march, I’m sure they’ll target me for butt jokes.
Without me, there’d be no one to ridicule.
“Daddy, when will you be home?”
I’ll be home Monday evening, sweetheart.
“But I thought you’d be home Sunday.”
Well, I worked it out so I could spend one extra day with Mr. John.
I was telling one of the most darling people in the world that, rather than spend another day home with her, I’d chosen to spend a day with one of the most corrupt people I’ve ever known in a place renown for wickedness.
Manhattan, here I come!
I’ve been invited to attend a lavish Big Apple press trip. For the next four days, truly, I’ll be living like a more humble sort of Trump. The itinerary includes three nights at a landmark hotel, great restaurants and luxury box seats to SRO shows.
Go ahead and feel free to resent me. It’s perfectly understandable.
Whether anyone, especially me, is worthy of such posh pampering is a moral puzzle. But the only thing worse than being unworthy of the attention would be to mope about being the recipient of it.
Life’s short and full of pain. You have to dance whenever you hear the music.
My end of the bargain is I need to come home and write and sell a dazzling story to a prestigious publication for all to see.
My great fear isn’t falling short of that obligation. No, I’m afraid I’ll do or say something stupid and I don’t want to come across as a jerk or a boob. Word would spread quickly and the next time I get invited on a trip, it’ll involve someplace like the Bob Evans in downtown Dayton.
To reduce the chances of this, I struggle to bury my inner smart ass so deeply in manners, silence and social aplomb I fear he’ll suffocate and my life will become meaningless.
That’s why the fifth day with John, my old college roommate, is so essential.
After four days of being polite, profanity-free and eating things like salad with silverware, those ponies will be ready to bust free of the coral. The older I get the more I enjoy days of true dissolution like the one awaiting me on Sunday.
Days like that remind me of every day from 1979-2001. I was never truly evil. I never went on one of those sprees that involved breaking all 10 Commandments.
Well, at least never sequentially.
Nothing surprises me more than the number of people who think I’m “good” in the conventional moral sense.
It practically floors my wife who is truly good. Not only is she good, she’s a church organist. I’m hoping the connection will earn her a get-out-of-hell-free card for her backsliding husband.
Yet people persist in inviting me to talk to high school students, introduce me to their friends and foolishly invite me into their homes without bothering to secure things like jewelry and bath towels.
I guess if you live in a small town long enough without getting busted stealing chickens you’re considered one of the good guys.
That’s why a day in New York with the never-married John is the perfect remedy to all that unbidden goodness.
John’s perfectly corrupt. He drinks like crazy, smokes cigars by the yard and is so sacrilegious it’s surprising some crusaders haven’t duct-taped a tall lightning rod to his bald dome.
Once on a drunken ramble with my wife and I, Val -- she was sober, she swears --  twisted her ankle on Lower East Side curb and tumbled into the filthy gutter. John said, “Wow! That’s gonna hurt!” and kept truckin’. He later defended his callousness by citing the need for haste to make last call in a bar with a really great juke box.
I love my wife, but absolved him based on his reasoning.
In short, he’s everything I’d be if I’d never gotten married only with fewer hairs.
So that’s what’s in store for the next few days. Decades of joyful dissolution have dwindled to days.
And Monday, none the worse for wear, I’ll return to joyful hugs and armfuls of souvenirs I can only hope aren’t crawling with bedbugs.
One day of debauchery will have to last me for another six months or so.
Then it’ll be back to being good, for goodness sake.
Posted by Chris Rodell at 5:06 PM

We all need a friend like John. If for no other reason, the recovery makes us appreciate our polite lives at home. No go and have a good time that doesn't involve a station booking.

My "John" is named Frank.... Frank's happens to be named Mark.

Small world. I think we all know the same guy. He just goes by different names.

I think I love your friend John. Could you send him to Vegas, please? I need an elbow to hold in the den of iniquity.

Yes, he's a smashing good time. I'm sure he'll join you, glasseye, in Vegas. I'm about to embark on my Sunday with him. Should be fun!