Standing is the new sitting 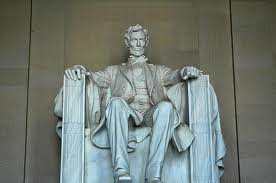 So I’m sitting here trying to think of a decent blog idea and all I can think about is how I wish I were laying here trying to think of a decent blog idea.
I’m doing this because in my mind I’m wrestling with recent news reports that said  standing has become the new sitting.
This is from Michael S. Rosenwald’s story from The Washington Post (I love the lead):
“Some people can’t stand working. Mark Ramirez works standing.
“He is not a waiter or a factory worker. He is a senior executive at AOL. Mr. Ramirez could, if he wanted, curl into a cushioned leather chair. No, thanks. He prefers to stand most of the day at a desk raised above stomach level.
“I have my knees bent, I feel totally alive,” he said. “It feels more natural to stand. I wouldn’t go back to sitting.”
Well, good for you. I guess none of us wants to be stuck one row behind guys like Mark next time we go to catch a matinee.
The story says standing at pricey gut-level desks (www.GeekDesk.com sells them for $799) is healthy, reduces drowsiness and is shown to increase life spans. It cited one fanatic who not only stands but walks a steady 1 mph on a treadmill while working at his desk.
Clearly, this endocrinologist missed his calling. He’d have made a dandy postal employee.
It’s an interesting debate, but I think I’ll sit this one out.
I learned early on stress is a killer and without fail I’m most stressed the more degrees I am removed from 180 horizontal. So my preferred postures are, in reverse order, sprint, jog, stand, sit, slouch and lay.
I’ve found the circumstance most geared to wellness is center bed, buried toes up in a quilt, while TV Land broadcasts a day-long marathon of “The Andy Griffith Show.”
If research proves that relaxing posture cures heart disease the way it cures hangovers it could replace CPR as a preferred emergency treatment.
I remember reading shortly after President George W. Bush appointed him defense secretary that Donald Rumsfeld’s true position was upright. With great foresight, he stood throughout the day for many of the reasons cited by today’s advocates.
I remember thinking: “Outstanding. What an innovative and thoughtful gent. Now, here’s a good guy to turn to if the country ever finds itself mired in a really stupid war.”
But successful standers are rare. The only two I could think of are “Price is Right” hosts Bob Barker and Drew Carey. Of course, if the tabloids are to be believed, both men spent considerable time horizontal and in the comely company of surgically enhanced women adept at gesturing toward things like skidoos.
At the other extreme is Hugh Hefner, the only man who’s made a success of his life lying down. But that job’s taken and when Hef goes he’s taking it with him.
So sitting to me is a happy middle ground.
I just can’t see standing catching on.
And how would history be altered if great leaders throughout history stood? What if Abraham Lincoln was renown for standing? How would that have altered the stunning Lincoln Memorial?
They’d need a hole in the roof.
How much more mayhem would Custer-killer Sitting Bull have wreaked had he been Standing Bull?
Would The Situation be more compelling if he was The Standuation?
It’s a lot to ponder, especially as I’m still trying to process just how Prop 19 was defeated in California.
You mean there is a deficit of pot smokers in California? The only thing I can figure is they’re all planning on casting their ballots this Saturday afternoon.
Now, there’s a group that’ll never be swayed by the standing-is-better argument.
In fact, many of the most avid pot smokers I’ve known through the years are perfectly at peace only when fully reclined.
Giving them the three options -- stand, sit, or lay -- and there’s only one eventuality.
Sit or get off the pot.
Posted by Chris Rodell at 4:47 PM

Note: A friend of mine e-mailed me the following comment. C.R.

"We went through a brief spell in my old division of having "standing meetings" only which were limited to 20 minutes to maximize productivity. And you know what? People didn't pontificate and we got things hammered out more quickly. Interesting, eh?"

I'm a world-class sloucher. Even when I'm horizontal, my body ends up looking like a comma. Or a question mark ...