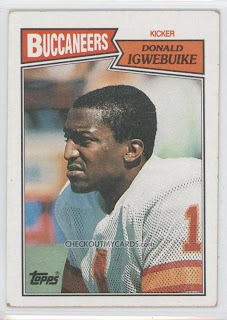 Of the 724 points scored in yesterday’s NFL games, 240 of them, more than 30 percent, were scored by a lilly white group of men who’ve always ruled a crucial facet of football the way Bull Connor used to rule Selma.
It’s a racial profiling so odd it practically defies belief, but anyone looking at the history of the NFL would conclude African Americans athletes are the victims of blatant discrimination.
Because on its pale face, it looks like the fair-skinned men who run the NFL don’t want black men kicking the football. They’d rather entrust the task to small white men named like they ought to be kicking in quaint wooden shoes.
While many of our best professional athletes are black, most of our best kickers seem to be, of all things, Scandinavian, a land known more for windmills and lutefisk than football.
Some of the greatest scoring machines in the NFL history are agile black men like Jim Brown, Jerry Rice, Barry Sanders and Walter Payton. Their explosive play will dominate highlight reels for as long as the game is played.
Yet in a sport where nearly 70 percent of the competitors are African American, some of the league’s best kickers have been named Jan Stenerud, Morten Andersen, and Gary Anderson (he’s a South African in the old school sense).
Yesterday’s game between the Pittsburgh Steelers featured a game-winning kick by a white man named Shaun Suisham, thus helping his team beat the Buffalo Bills and their kicker, Ryan Lindell.
Other kickers scoring points yesterday were white men named Nate Kaeding, Garrett Hartley, David Buehler, David Akers, Neil Rackers, Ron Bironas and Josh Scobee.
I haven’t the motivation to research all their lineages, but I can pretty much eliminate equatorial regions as their ancestral homelands.
In fact, in the past three years only one African American has been summoned to try his, er, hand at kicking. And he isn’t even a kicker.
He’s Detroit Lion defensive lineman Nadamukong Suh.
And he’s scored one point.
He was called in to make the extra point after the regular kicker suffered an injury.
The regular kicker’s name is Hanson, Jason.
In what for any blogger passes for actual research, I believe I found the best African American kicker in NFL history. He played for the Tampa Bay Buccaneers from 1985-89 and is the Nigerian-born Don Amechi Igwebuike.
Igwebuike’s kicking career ended when he was indicted for smuggling $1 million in heroin from Nigeria. He was acquitted of the crime in 1991.
Some sources say there have only been seven African Americans who earned their living kicking in the NFL, none of them for any duration longer than Igwebuike’s, and several of them were punters, most notably Miami Dolphin Reggie Roby.
By comparison there are currently seven African American head coaches in the NFL (and zero owners).
Yet, just seven kickers in the entire history of the NFL.
It’s extraordinary.
The only thing I can conclude is blatantly racist.
Blacks are just too cool to kick.
It has to be. The culture that gifted humanity with the Delta blues wants nothing to do with an essentially silly skill practiced by grade schoolers at recess and men who reside countries that insist on calling soccer futbol.
Every aspiring football player, black or white, probably first aspires to be a quarterback, then wide receiver, etc.
A good kicker is likely someone who’s failed at every other position.
But why it seems to draw men of Scandinavian/Northern European descent mystifies.
Perhaps the harsh conditions of their ancestral homelands make them immune to the inevitable criticism that comes with high stakes kicking. Because even skillful kickers are eventually hooted out of town for missed kicks or evident stupidity.
That’s what just happened here in Pittsburgh with Jeff Reed. He said some stupid things, missed some easy kicks and now we’re all in love with this Suisham guy.
At least until next Sunday.
In this regard, Reed followed in the cleated footsteps of the former Indianapolis Colts kicker named -- Hello, Holland! -- Jeff Vanderjagt.
During a drunken interview, he once told reporters Colts quarterback Peyton Manning and head coach Tony Dungy were chumps and would never win a championship.
Manning could have been disparaging the entire kicking community when he said, “What can I say? Our idiot kicker got liquored up and ran his mouth off. The sad thing is, he’s a good kicker. A good kicker, but an idiot.”
The next year Vanderjagt was gone. The year after that Manning and Dungy won the Super Bowl.
You’d think there’s bound to be some grant money out there for a guy like me to snag to study the whole thing. It’s fascinating.
Of course, if I was serious about money, I’d devote my time to learning how to boot a football through the uprights.
Really, it’s perfect for a white guy like me. I’m Swedish and certainly have a high tolerance for disparaging remarks about my shortcomings.
I could kick myself for not thinking of it sooner.
Posted by Chris Rodell at 11:29 AM

Vanderjagt and Tiki Barber ... bailing at the wrong time. Ha! On both counts.

Ha, indeed! I asked a friend of mine who covers the Steelers about guys who kick with wooden shoes. He said most of the kickers have wooden heads.

Well, there goes my post for around Super Bowl time. You beat me to it.

I've often noticed the same disparity and wondered about it. Black players are dominant in the league overall, and especially at the positions requiring strong legs (running back, wide receiver, defensive back) so one would think that this other position that requires strong legs... but, no.

Hey, don't let me stop you, my friend. That's still fair game. I'd enjoying seeing what you'd write on it, too. It's funny how anything involving race, even when it's something that ought to be construed as positive, is a forbidden topic.

It's so odd with the kickers. Man!