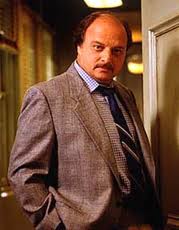 News reports say stranded cruise passengers survived on nothing but spam, mayo sandwiches and booze! Booze! Booze! Sounds like my diet from 1985-89.
I’m confident I could write a decent and semi-coherent blog post about the whole incident, but I’m lacking the motivation.
As previously reported, I’m in the midst of a splendid NYC frolic. My every instinct is to completely blow off the blog until I feel the urge to write something Thanksgivingy.
But after blogging about three times a week for more than two years I feel compelled to post something. Anything.
This is a mild form of insanity. It’s not like the blog police will come along and revoke my license to blog or make me take a blogging pay cut.
So here are some random thoughts from the past couple of days mingled with a tweet or two.
Posted by Chris Rodell at 9:11 AM

Okay, you had me at cheese stakes and lobster roles, but then you had to throw in Joanie loves Tchotchke. Ha!

Yes, God bless twitter. Whenever I don't feel like doing a full post, I can cherry pick a handful from there and re-run them and maybe expand on them.

I'm really grateful to you, Averil, for pointing your readers my way. My stats page says they took your advice and checked my blog out.