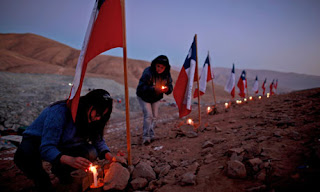 When I heard the news of the trapped Chilean minors I, out of spiritual habit, said a prayer that heroes would save their lives.
I can’t think of a worse slow death than being entombed alive.
Now that euphoric videos of the 33 men have been released and the outlook for eventual rescue is positive, I have a new prayer.
I’m praying they’ll invite me to join them in what Jay Leno’s calling the ultimate man cave.
I haven’t seen a party like this since the destruction of the old Berlin Wall.
They have access to movies, taped sporting events and board games. A life-sustaining umbilical linking them to the surface is about 4-inches in diameter, just wide enough to transport a constant mule train of brats and canned beers.
Parts of it remind me some giddy weekends back in the old fraternity house in Athens, Ohio.
I’ve heard it may take as long as four months to extricate them. Most have already lost about 20 pounds since the August 5 cave-in -- and this was considered a positive development: smaller men will reduce rescue hole circumference and essential drill time.
Talk about incentive. If they keep losing 20 pounds every three weeks someone with stout lungs will be able to suck them all to safety with a really, really long straw in time to trick or treat.
This makes the already-compelling team dynamic even more intriguing. Will the tubby guys let the skinny guys go first while they endure more girth-decreasing calisthenics?
If all goes well the men will be freed around Christmas although for symbolic purposes I’m hoping a resurrection happens on Easter.
Until then, we are about to be privy to one of the most fascinating case studies of human interaction in recorded history. I’m going to be glued to what has the makings of the greatest reality TV show in history.
People spent hours staring at the gushing Deep Horizon well. Imagine how much we’d watch if they kept a live feed in the rec room beneath Chile’s Atacama Desert.
It’s happening already. One of the miners proposed to his surface girlfriend and swore he’d help her pick out the dress as soon as he reaches the surface. But will their love endure? Will she stray?
What other human dynamics will unfold over the course of the next three months?
Perhaps two of the men way down there in the lonely dark will become amorous and emerge as lovers. Certainly, one of the 33 will get on everyone else’s nerves. Will they decide to slay and fillet him?
Right now, we’re getting force fed all the uplifting stories authorities want us to hear.
Certainly, there is much heroism and admirable behavior, but those are far from the only components in our behavioral tool kits.
I understand this because I was one of the hundreds of reporters at the Quecreek Mine in 2002 when subterranean flooding stranded nine miners for four days about 45 minutes due east and roughly 240 feet straight south of my western Pennsylvania home. A couple magazines contacted me about providing spot news coverage, which I was thrilled to do.
Eight years later, two events remain vivid: first, my wife and I weeping when Gov. Mark Schweiker announced all nine miners were alive and well.
And, second, was an interview with one of the 50-something miners whom I visited a week after his dramatic rescue. I asked what he was thinking about way down in that dark, dank mine.
“I thought, man, if I ever get out of here alive the next time anyone catches me underground will be the day they bury me and I’m going to spend the rest of my life stoned immaculate. And I’m off to a really fine start.”
I think of that stoned immaculate guy whenever I hear stories about how brave and fearless the Chilean miners all are.
I’m sure some of them are, but for the most part they are just a bunch of regular guys marooned in an isolated cell that would drive 99.9 percent of the world mad.
And that’s what makes it all so fascinating.
Tweet of the week at http://twitter.com/8Days2Amish: “Does anyone think any of the other kids were mean to him because Jeremiah was a bullfrog?”
Posted by Chris Rodell at 11:05 AM

I read today that NASA doctors are not allowing booze or cigarettes to be sent through the boreholes. These men are already deprived of family, friends, and sunlight. Now they can't even commiserate over a couple shots of Jack Daniels?! I wonder if pasta vodka sauce is also banned?

That's diabolical. First thing I'd do after reaching the surface, is strangle that man who dictated my sobriety for all those months. Thanks for reading, Erin!