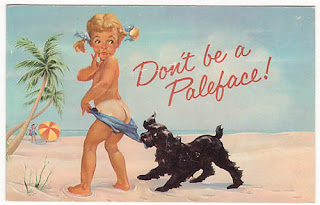 It seems like in the entire recorded history of man there’s only been one ark and it belonged to Noah. I’ve never heard of Mel’s Ark or Burt’s Used Arks.
Well, the alarming increase and frequency of weather-related catastrophes convinces me we’re going to need a whole fleet of arks over the next 100 years or so.
For years, those of us who believe the science and anecdotal evidence that says global warming is real have had to contend with the shrill arguments of people who instead believe people like Rush Limbaugh.
These people are beyond your typical Global Warming Skeptics.
In fact, you could call them Global Warming SCOPEtics, people who believe we can continue to use fossil fuels at an alarming rate and everything will still wind up all green and minty fresh.
It’s a startling turn of events for a movement that spies doomsday scenarios in 14th amendment anchor babies, auto industry bailouts and President Obama’s birth certificate.
But present them with front page body counts from Biblical floods in Nashville, Pakistan and Arkansas and they say, “No need to panic. Just as God intended.”
They think nothing of record heat waves sizzling the eastern U.S., and drought and famine in Russia, Asia and Africa.
Their idea of prudent foresight in the face of these facts is to buy stock in the conglomerate that makes Coppertone.
How they explain last week’s news that an iceberg four times the size of Manhattan broke off Arctic Shelf and started drifting south, I do not know. Maybe they’ll say polar bears were eager to visit the Caribbean before bargain hurricane season rates expire.
Of course, they don’t believe Al Gore, and I understand that. I’m a partisan, too. I’d find reason to argue the contrary with Sarah Palin if she told me Levi Johnson, her on-again, off-again prospective son-in-law, is unfit to be Wasilla’s next mayor.
They certainly scoffed Sunday when The New York Times printed a detailed examination linking recent catastrophes to the likelihood that it is caused, at least in part, by global warming.
That’s fair, I scoff when Fox News claims it’s fair and balanced.
We live in divisive times. We have trouble setting aside our petty differences long enough to even decide which of our many pressing issues is urgent enough to deserve the next frustrating stalemate non-solution.
For me, the most poignant evidence of global warming has come from non-partisans who’ve enjoyed God’s eye views of the situation. Astronauts who’ve flown multiple times say that in just 20 years our world’s lost lots of white.
And National Geographic says Ernest Hemingway’s fabled Mt. Kilamanjaro will be without snow by 2022.
But those artistic sorts of arguments are unlikely to convince any “Drill! Baby, drill!” belligerents
Now I have a better one. It’s from Palin’s next door neighbor.
Yes, Russian President Dmitry Medvedev now believes in global warming and thinks drastic measures need to be taken.
“Unfortunately, what is happening in our central regions (heat, drought, famine, wildfires) is evidence of global climate change,” he says. “We have never in our long history faced such weather conditions as these.”
This is significant because the Russians had previously been on record as rooting for dramatic global warming.
Yes, one of the world’s most self-serving nations glimpsed the truly sunny side of to the phenomenon and basked in it. They thought it would thaw Siberia and open up economic opportunity in the always snowy hinterland.
So if leaders like Medvedev are saying the Russian equivalent of “Yikes!” then it is certainly something that should be accepted as fact and dealt with as dire.
If not, then we’re cooked.
Oh, well. There may at least be a slim silver lining to this sizzling apocalypse.
Some crafty entrepreneur is bound to earn a fortune franchising build-it-yourself ark emporiums that’ll give even old Noah a real run for his money.
Posted by Chris Rodell at 10:28 PM

It amazes me that there are people out there who openly denunciate global warming statistics and research. I suppose the mentality of "Industry means prosperity" is tough to sway. But I do have a question for those skeptics (originally posed by Sarah Silverman): "Why do you hate polar bears? And what is your level of disdain for puppies and kittens?"

Love that question, Erin! I just saw a thing on Politico.com about the GOP really hardening their stances.

Now, I sense that doesn't jibe with our Minnesota friends, does it Max Power? I started the video, but had to shut it down. I want to watch it without distraction.