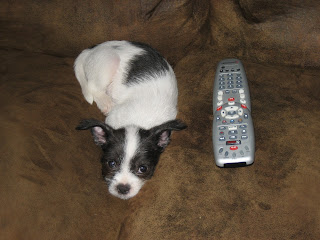 I knew we were going to get a dog. I just never dreamed we’d be getting the dog we did.
Surrendering to the inertia of a child pleading for a puppy is inevitable. A 9-year-old girl is so earnest and tells such sweet, convincing lies.
“I’ll be responsible. I’ll take care of it. I promise!”
We’ve had the dog four days and I’ll bet I’ve already spent a combined six pre-dawn hours standing outside encouraging an animal I barely know to move its bowels.
That’s a big part of pet ownership. You stand outside in all kinds of weather urging the dog to poop. And when it does you feel one of the oddest surges of true happiness.
Good doggie!
When the girls and their mom called and said they found a farmer who was giving away really cute puppies, I tried to picture the bright side, the side that didn’t involve hours waiting for a dog to poop or get done sniffing stuff it finds fascinating.
I thought of the companionship, the warmth, the wagging tale when you walk in the room.
I thought of our last dog, Casey, a sweet, loving golden retriever, with whom I spent countless joyful days playing frisbee. That dog could have joined the circus. He was a sturdy fellow and loved to lounge beside us in the front of the fire.
I certainly didn’t think of Snickers.
He’s part pug, part chihuahua, a parental pairing that sounds like the screwball premise for some canine rom-com.
He’s a purse puppie, the kind Paris Hilton uses as a fashion accessory.
This is a dog whose fangs will never seize a soaring frisbee.
I keep referring to him with female pronouns. I can’t believe we’re the same gender. French poodles could bully lunch money from a dog like this.
Right now, we’re collectively failing at house training. We have the crate, know the ground rules, and are ever vigilant to its every twitch.
The problem is the dog does nothing but twitch. I fear it’s going to be high strung, not the kind to sit by fires, but the kind that starts them.
My wife’s upset the puppy doesn’t seem to be taking to house training. Every accident sends her into a frenzy of wipes, disinfectant and alien admonishments to a dog that still doesn’t really speak dog yet, let alone English.
Me, I practically bark with laughter, “You call that a crap!”
Right now, its tidy little turds and its thimble-sized bladder spills are to me the dog’s most endearing trait.
Everything about it is diminutive. Casey used to bolt from the yard and could be gone for hours.
Snickers could bust loose during the catchy theme to “True Blood” and I wouldn’t bother to pursue her, er, him, until the show’s bloody conclusion.
It would take him 20 minutes at a full sprint to make it to the curb.
I’m sure I’ll grow to love it. I made many of these verbatim complaints about Josie and Lucy when they were born, and I’ve grown to love them very much.
But right now he’s just a nuisance. I can’t stoop low enough to pet him without tipping over.
He bites our toes. If any hoodlum breaks into house we have to hope he’s barefoot.
He’s so insubstantial I fear I’ll sit on him and confuse his death struggle for a mosquito bite I’m too bored to scratch.
(Another HBO plug: That very thing happened with Christopher Moltisanti on “The Sopranos.” He came home high and crushed the life out of Adrianna’s annoying little dog when he passed out on the couch, an ass-whacking which led to a comical intervention among the mobsters.)
So it’s just another layer on our summer of discontent. Good news has been evasive, we’ve warred over family functions, house projects and have spent this entire, scorching summer without air conditioning.
And now we’ve added a dog to our hot house.
I guess that makes Snickers the perfect fit.
This is one dog that will never be cool.
Posted by Chris Rodell at 1:44 PM

Ah, he is very sweet. I am sure he will get the toilet thing soon!!

My daughter was another of those 9yo needing a puppy! We ended up with a coton-de-tulear which is just as bad. (he is 2 and a half now and perfectly toilet trained!).

My daughter has a dog treat recipe site (she wants to raise money for dog two cos we said she could only have it if she paid for it. Big mistake!). If you are training your pup try her dog training treat page at http://www.crazycrumb-dog-treats.com/dog-training-treats.html

Thank you for the compliment and the sweet and sympathetic story of your daughter. Aren't they darling at this age! Really, I can't say no to her. She'll have her own car before she's 12.

I'll check out your daughter's site, too, Julie. I'm grateful to you for taking the time to read, to comment and to offer helpful tips.

Have a splendid weekend!