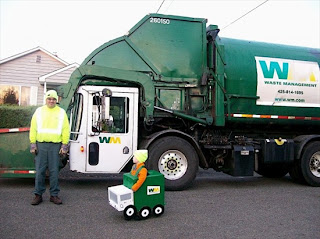 I guess it all starts with me wanting to be a garbage man. Some would say I achieved that goal from 1992-2000 when I worked for National Enquirer, a job that required sifting through the occasional trash bin.
But I’m not talking about a journalistic trash man.
I’m talking about the real thing.
As a boy, I’d thrill every time the big truck with the burly men hanging off the back came roaring up the road. They were big, noisy and boisterous. They’d seize the big barrels, frisbee the lids into the hedges and dump all our stinking trash into the big maw in the back.
Then -- EERRRRGGGHH! -- they’d press the button and all the newspapers, food stuffs, bottles and cans we threw away before enlightened recycling began was devoured in the hungry maw.
I never dreamed of sitting in a small, still room all by myself spending hours crafting pointless stories destined to be ignored by the multitudes.
Geez, when I think of it in those stark terms, it’s a wonder I don’t run screaming over to Waste Management and beg them to let me jump on the back of a big green truck bound for the local dump.
And, really, why wouldn’t most men?
It’s real work.
Martin Luther King Jr. was slain while he was engaged trying to bestow common dignity to Memphis trash haulers. The association further ennobles my appreciation for the men who haul garbage.
That’s why this morning I’m feeling so ashamed. I played a malicious trick on a man who contributes so much more for society than I could ever hope to.
Yes, this morning I pranked the trash man.
I know every week on this day he shows up in pouring rain, sizzling sun and does his dirty duties. When the record February snows closed schools, streets and businesses, this two-man crew never missed a day or slipped off schedule.
And every day when they are out there behind The Pond, the tavern above which my office is strategically located, I stop whatever I’m doing and race to the window to watch.
It’s true. It takes them about 10 minutes to hook up the winch and raise the dumpster so all the bar trash falls into the truck. The two-man crew is so conscientious, I’ve never seen so much as a bottle cap drop onto the parking lot.
Then the shaven-headed guy with the sunny demeanor to match his tanned complexion reverses the procedure. The winch cable sets the dumpster back down near the fence between the lot and family home behind it.
It’s easier work than it used to be and safer, I’m sure, but there’s still potential to get a careless hand squashed by all the heavy lifting machinery.
Then baldy unhooks the cable, jumps back on the truck and is again on his merry way.
But earlier this spring I observed him adding a surprising natural function to the procedure.
He’d step behind the angled dumpster with his back to the fence. He’d remove his work gloves and set them on the big green bin. He’d look left. He’d look right. He’d look left again.
Even with his body concealed, any man and most worldly women could tell exactly what he was doing.
The trash man was urinating behind the dumpster!
It was broad daylight. It’s in a business parking lot that would soon be crowded with lunch patrons. It’s between two busy streets where people push strollers and walk their dogs.
It seemed so audacious. I was amazed. Certainly, I couldn’t begrudge him need for relief. It’s not likely a local restaurant or customer would welcome him into their homes to use the bathroom.
So a guy’s gonna do what a guy’s gotta to do.
Yet a surprisingly prim part of me felt compelled to signal that using my bar’s dumpster for a toilet was improper.
So today from behind the curtains of my second floor office, I lay in wait for him to answer nature’s call.
He did his job then he removed the gloves. He looked left. He looked right. He looked left again. I waited until he assumed the relaxed posture of a man whose bladder is beginning to spill.
Then I pushed the red panic button on my car fob. Not twenty feet to his left, the only car in the parking lot, my Saturn Vue, began rhythmically and loudly honking.
I don’t know how I expected him to react, but here’s what happened:
He jumped as if he’d been tased. His feet left the ground. His expression was similar to that of a jewel thief caught in the act.
A weekly routine of his that usually lasted in excess of 50 seconds was over in 8.
Startled, he zipped up and zipped back into the truck. In a flash, he and the truck were gone. Only an echo of the engine remained amid the swirling stink.
And there behind the cowardly curtain, I began to laugh. I laughed my ass off for about 10 minutes. And now an hour later, every couple of minutes, I’m still chuckling.
It was one of the funniest things I’ve ever seen.
And I feel small because of it.
It was a dirty, low-down trick on a noble, hard-working man doing a job few admire and fewer would do.
I know some day I’ll need to make amends.
One day I’ll see him in that parking lot and I’m going to apologize. I’ll tell him about my dirty trick and that the prankster in me just couldn’t resist.
Then I’ll offer my hand in apology and respect. I hope he’ll shake it.
And if he does, I know exactly what I’m going to do next.
I’ll rush straight to the bathroom and give that hand a really good scrubbing.