Pit bull loose in my 'hood 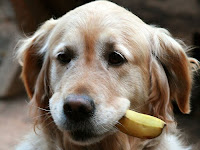 The homestead is on full alert. The kids are patrolling the perimeter. Mom’s scanning the horizon and I’m trying to instill some prudence lest Santa get his jolly ol’ ass ventilated by my trigger-happy troops.

A bad Storm is loose on the land.

Storm is the name of the lost “pet” pit bull that escaped from our distant neighbor’s home further up in the woods.

It all started for us last week when the doorbell rang at our woodsy home. Outside was a frantic looking gentleman who introduced himself as “Bill from up the hill.”

“My dog got away this morning,” he said. “Have you seen her?”

No, I told him and it was true. A national scandal involving a golfer had broken and I’d seen nothing but Tiger (and, no, I didn’t verbalize that lame joke to this distraught senior citizen).

“She’s a gray pit bull. If you see her, please give me a call. Here’s my number. Thanks.”

What’s her name? I asked, hoping it would be something like Marshmallow or Daisy.

“We call her Storm.”

And with that he was gone and the stew of questions began to percolate up into the swampy part of my brain.

Has he called the local animal control? Are my children in jeopardy? And, hey, Mr. Bill, why on earth would anyone want an animal that’s been bred by Satan to kill?

Now, in my experience that last question is going set pit bull lovers to howling. You’ve probably seen them on the news.

“Ah, pit bulls are cuddly and misunderstood,” they say. “They aren’t dangerous unless provoked.”

That’s what they tell mic-wielding news reporters who’ve been summoned to a fresh crime scene where a pit bull’s mauled a child or a pony.

Now, I don’t know what a pony could do to provoke a pit bull, unless mildly chewing pasture grass is considered provocative.

The incident stirred me to try and get local sportscasters to start using the phrase “he was on him like pit bulls on a pony” to describe a Porter QB sack. I was disappointed when I was told it was in bad taste, something a savage pit bull might dispute.

But if we do get a dog I can assure you it’ll have these two qualities: It’ll be sweet and it’ll be dumb.

It’s been three years since Casey, the sweetest, dumbest dog in the world died. He was so dumb and so sweet I was convinced one day he was going to get killed chasing a helicopter.

We were playing frisbee on a splendid spring day in the big unfenced field behind our old house when he was startled by an approaching helicopter.

It was at about, I guess, 2,000 feet when the golden retriever heard the whop! Whop! Whop! of the rotors. He looked nervously around at eye level until the chopper came slowly into his peripheral vision and began to hypnotize him.

His first steps were tentative, as if he thought he’d try sniffing the strange vehicle first. When that didn’t work, he tore off in full sprint, head skyward. He didn’t stop until he ran snoot first into a distant church wall.

Blacks, he said, hate vicious dogs and, really, didn’t mind that Vick and his buddies were using them to do what they’ve been bred to do: fight, kill and die.

And he’s right. And that part about Satan wasn’t just hyperbole. Pit bulls were deployed to defend demon seed Damien in the classic 1976 thriller “The Omen.”

(Note: In fact, they were Rottweilers, not pit bulls. Damn that careful research.)

Storm’s been loose for five days now. By now she’s hungry and starved for affection. I fear she’s out back eating gentle deer and mating with bears to produce monster pit bears.

I don’t know what sort of menace she’s up to, but I do know this: I haven’t seen a single wild pony since Bill from up the Hill warned me a bad Storm was coming.

Coincidence? I don’t think so.
Posted by Chris Rodell at 2:13 PM