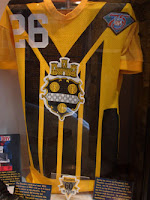 My life curse is that I, a man who can’t even earn a dime for himself, sees how the already filthy rich can grab even more loot.

Take this past weekend. I spent $75 to attend a professional football game between my hometown Pittsburgh Steelers and the Baltimore Ravens.

It would let daffy fans of teams like the perennially hapless Detroit Lions delude themselves into thinking that maybe by then -- cross your fingers -- the Lions will be competitive.

With global warming, games in the fure wil probably be played in the nude....

seriously, though, i love football, and the NFL is pissing me off frequently b/c of that blackout crap and the fact that it costs an arm, a leg, and a kidney to attend a fricking game. that's why i haven't been yet.

Jinksy, when that happens that's when I get my old transistor radio out and listen, not watch, the games.

And, thanks, too, Lexcade, for seeing the wisdom in throwforward jerseys. I couldn't believe the NFL was thinking of blacking out games in Cinci early this year. I'll bet you were furious. What greed!

That was cool was Ocho Cinco did in buying all those tickets.

Happy New Year to one and all!