Wrecked my car, ripped my shirt; life lessons from a colossally bad day 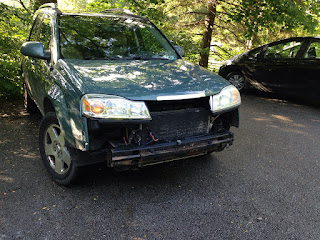 The caller had heard what had happened and broke right in with urgent questions: Was anybody hurt? Were ambulances summoned? Did EMTs deploy the Jaws of Life.

I assured him he was over-reacting. Everyone was fine, the loss would be overcome. And, jeez, who’d use the Jaws of Life to remove an able-bodied man from a ripped shirt?

“Ripped shirt?” he said. “I heard you were in an accident. Who said anything about a ripped shirt?”

Both, indeed, had happened Wednesday afternoon.

It’s just the ripped shirt, an heirloom Tommy Bahama, mattered more to me than the stupid car.

Now, I know what you’re thinking: “Ah, ha! It was 6 p.m. You were leaving a bar! You’d been drinking beer for at least three hours! You were drunk! Over-the-limit! Drunk!”

Wrong. Remember, my office is in the Tin Lizzy. I don’t just socialize there. It’s my place of business. It’s where I conduct my commerce, the place where I transact so much moolah I can afford to drive a 2007 Saturn Vue with 209,998 miles on it.

In fact I hadn’t been drinking for three hours. On this day it had been three hours since I’d been drinking. It’s true. Many people are aware my office is atop the historic Tin Lizzy. It’s a very popular place.

It’s not at all uncommon for friends, strangers even, to get in touch and ask if I’m free for beer and conversation. I don’t think I’ve said no to that cheerful combo since I had my first beer back, gee, I think it was in the 4th grade.

So Mike texted and said he was bringing a buddy along for wings. Was I free?

But I could be bought!

I’m kidding. I’m not that kind of crass. But my friends did buy my two beers. In exchange, I gave Ron a signed Arnold Palmer book, and Mike a “Last Baby Boomer.“

God help me, the transaction meant I could consider the day a rousing fiscal success.

I spent the next three hours energetically working on a book proposal that may or may not eventually cost me more money to produce than it earns me to sell.

So at 6 p.m. the summons rings out. My family needs me! Not for wisdom, guidance or clarity.

Somebody had to fetch the pizza!

It was Day 1 of the five day Mardi Gras that is my daughter Lucy’s 13th birthday. That meant six hungry 8th graders were right then sitting with growling tummies around our dinner table.

At 6 p.m. it’s smack dab in the middle of the Youngstown rush hour. Now, Youngstown has just one stop light, but rush hour is still rush hour if it’s 10,000 cars or 10.

I had this going through my mind as I calculated my route.

It was a beautiful day. I knew there’d be golfers enjoying the twilight at Latrobe C.C. I could turn right out of the Tin lot and circle the club. It would take a little longer, but there’s a reason people like me prefer the scenic route.

But I thought of those hungry children back in my home and how they could combine to rip me limb-from-limb if I showed up with cold pizza.

I decided to make a fateful left.

I don’t know how the drunk drivers pull it off.

Well, my new friend Sandy was pulling out of the Rainbow Inn. I never saw her.

It wasn’t a fender bender. More like a fender obliterator. Ripped the grill clean off. I got the worst of it. My butt cheeks are clenched as I await estimates.  I’ll soon be down several thousand dollars.

But I anticipate being up one Facebook friend and you just can’t put a price on that.

So if no one was hurt, thank God, how’d I rip my shirt? Snagged it on a rusty bed frame later on back home when I was tending to the basement dehumidifier.

I loved that old shirt.  So unique. Good thing I have a closet with 15 other outstanding Tommy's  — ones that’ll never be worn when dehumidifier maintenance is being conducted.

Later on when the pizza and the guests were gone, Val asked if I was any closer to realizing my earnings potential.

I thought about telling her how before the accident I’d traded two books for two beers. I decided to keep that to myself and assured her — hallelujah — fruitful times were just around the bend (if you can see past the goddamned ambulance).

I’ve tried in vain to think of some profound lesson from this challenging day. I’m tempted to say it’s, “Always take the scenic route.” But that can’t be it.

My whole life is what happens when you always take the scenic route.

You somehow in the eyes of others become the scenic route.