Staying at the Watergate Hotel in '02 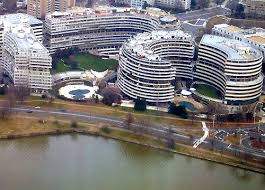 I have a feeling younger generations and less aware adults will be surprised to learn you can stay at the Watergate. Rooms start at $467.

I did a travel story about the 30th anniversary of the Watergate break-in. It ran in about 10 newspapers, including here in this link thoughtfully preserved by the San Francisco Chronicle.

I think one reason the story did so well is even newspaper editors had forgotten that the word Watergate initially evoked luxury, not scandal. The complex with its mix of commercial/hotel/residential opened in 1967 so to some Watergate meant home-sweet-home.

“People from around the world hear Watergate and think scandal, but I can’t think of anywhere I’d rather live. We love it here.”

That was Bob Dole. He and wife Liddy moved there in 1972, the same year as the break-in when Dole was chairman of the Republican National Committee. Dole told me he was in Chicago the night of the break-in.

We met the Doles while Val and I were dining in Jeffrey’s, at the time the Watergate’s premier restaurant. The restaurant was a favorite of George and Laura Bush when they were in the Texas governor’s mansion in Austin. Jeffrey’s opened the Watergate location when Bush became president.

It was fun seeing the Doles at dinner while we there. The place seated about 100 and both of them graciously took the time to come up and say hello to every table.

I told him I was doing a travel story about the Watergate — the 5-star dinner was free, too — and would love to interview him about it being his residence.

“Sure! I’ll be happy to,” he gushed. “Call my office first thing Monday. I’ll talk your ears off!”

He was lying. He dodged my calls for a month before granting me about five measly minutes of crabby responses.

I shouldn’t complain. At least he gave me more than I got from Monica Lewinsky. She lived in the Watergate when the Clinton sex scandal broke and said it was a wonderful place to be “imprisoned.”

Dole did say he used to enjoy emerging from the doors and seeing the crestfallen faces of the paparazzi when they saw it was him, not her.

It was really a fun weekend for Val and I. It was our first weekend without our new baby. They’d given us a nice suite and I remember enjoying a bottle of free wine while overlooked the Potomac.

We’re taking the kids to DC this weekend so I’ve been doing a lot of reminiscing. It occurs to me New York is the only big city I’ve visited more than our nation’s capital.

I think one reason is my old man was big on instilling in his sons the significance of history and Washington’s unique place in it.

I’ll never forget my first visit. It was July 27, 1974. Dad said, “Be sure to remember this date. You boys can say you were in the capital the day the House of Representatives voted to impeach President Nixon because of Watergate.”

It had a profound impact on me and my sense of history, one I intend to impart on my daughters.

Will I try and put the current tumult into context?

I’ll tell them the story of a man drunk with power, a man who felt entitled and believed he was worthy of festive adulation.

And I’ll tell them how I dream of seeing history repeat itself.

What I won’t tell them is if I’m talking about the president being impeached or their Daddy visiting DC and again getting lots of swell free stuff.

“Use All The Crayons! TRAVEL!”