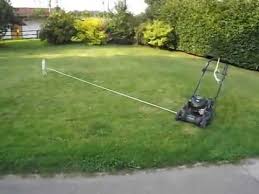 Spring is when Mother Nature puts on her makeup, all purple, scarlet, pink and green. But the dominant color at my yard Sunday was yellow. Like a chicken.

Or a really big man peep.

I cut the grass — and it wasn’t even waist high.

Regular readers are aware of my annual competition with my old buddy Paul to see which of us can be the last to cut our respective lawns.

I talked to one friend who’s already mowed his lawn 10 times. The tally proves he doesn’t own his home; his home owns him.

Me, I cut my grass just nine times all last year. I scrawl detailed records of each mow on the hood of my John Deere. The records I turn in to the IRS are less precise.

This is the first time I’ve cut my grass in April since I began keeping records. I’m sick over it. The irony — tragedy, really — is if I could have held out another 12 hours I’m sure I could have made it to May 15. The forecast calls for 10 straight days of weather too crappy to mow.

Sunday’s weather provided a window where I’d run out of excuses to avoid the first cut.

The only thing higher than my capitulation is my shame. Both now tower above my lawn.

Making to nearly June without having cut the grass was a revelation. I believe if I could have made it another week or two I could have bridged a point where the summer elements would have begun to kill the lawn before it needed cutting.

But with global celebrity within my grasp, I caved.

People think this is a lark, but there’s tremendous pressure to conform. It comes from neighbors, society and especially from family. My daughters began their annual pleading in mid-March when warming suns began to coax the tendrils skyward.

“Please, Daddy, cut the grass! It’s embarrassing. We look like the neighborhood hillbillies!”

Now, I love my daughters.

But I also love my planet.

Paul and I are at the vanguard of a movement that believes obsessive lawn care is bad for the environment. It wastes water, fuel, pollutes the air and kills tiny native woodland creatures.

Paul, a news reporter, spends part of each day, I guess, researching fatal lawn mower accidents from around the globe. He sends me the links to encourage me to stay true and stay off the mower.

It’s great having a buddy who cares!

I love being part of a movement where key participants remain stationary.

Sure, a well-manicured lawn looks nice, but so does — speaking of great grass — a happy hippie meadow.

It’s only a gentleman’s bet. Some have suggested we wager, but we think that would diminish our environmental altruism. We do it for the love of the game.

So I’ve lost this round.

Or have I? Perhaps we should factor in our excuses. Paul works a full-time job. He has little time to mow.

Having not had a job since 1992, I have no excuses. Such audacity should be a factor. And I’ll bet I cut fewer times over-all than him.

So many elements. We need a system.

A Sabermetrics for couch potatoes!

But today it is his turn to gloat. I can anticipate his every taunt. He’ll say I’m gutless, a coward, that I couldn’t take the pressure. And he’ll be correct.

It’s one of those rare instances when cutting it proves a man can no longer cut it.

Chris It is obvious you cut and ran... The John Deere.

No running involved. Just sitting on the tractor.