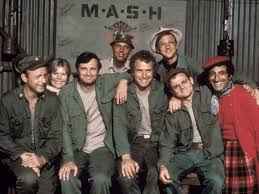 I made one of those bone-headed mistakes last weekend that will now haunt my nearly every day for the rest of my run. What did I do?

Now, I knew better. The less you know about any performer the better. Just enjoy their art for what it is.

But I’m on a bit of a M*A*S*H resurgence. AMC has been running hours and hours of it and I often click the channel guide and check in if it’s one of my favorites.

The series finale, “Goodbye, Farewell, Amen,” aired February 28, 1983, and was watched by 126 million Americans, more than the Super Bowl and more than “Roots,” the landmark mini-series.

It remains the 9th most viewed program of all-time. It is the only show in the top 20 that was not a Super Bowl.

Running for 256 episodes from 1972-83, it started out fresh and hilarious and spiraled into tedious and moralizing — sort of like an hour conversing with me in in any bar after 10 p.m. on any Friday night.

It starts with that indelible “Suicide is Painless” theme song, at once dark and jaunty. The lyrics — and most of us know them remotely through the movie — are perfectly evocative of a show that for so many years nimbly careened between humor and despair. Did you know the lyrics were written by director Robert Altman’s 14-year-old son Mike and that he earned $1 million for the effort or $930,000 more than his dad was paid to direct?

Whatever genius for soundtrack composition the young Altman had, it seems to have peaked before he was old enough to drive. His cultural foot print beyond co-writing the M*A*S*H theme is faint.

Some M*A*S*H re-runs are among the funniest anyone in TV’s ever produced. These uniformly included the characters Trapper John, Henry Blake and Frank Burns.

Burns, especially, was critical to the humor. He was bumbling, mean-spirited, greedy, ambitious — sort of like Tony Soprano if instead of creating wounds Soprano sutured them with 3-Oh silk.

But Trapper and Henry were also essential. I think the show found the perfect balance between light and dark with the Season 3 finale when — Spoiler Alert! — Henry Blake dies in a plane crash. Still chokes me up.

The show remained funny at times but I believe it began to fade when it forsook its comedic emphasis. It tried mingling comedy with drama, but the humor seemed strained, the drama heavy-handed.

Yet, I still find it oddly compelling and am still intrigued by the cast, and enjoy sharing with friends obscure facts like Muppets creator Jim Henson based Miss Piggy on Hot Lips Houlihan.

Pursuit of facts like that are what got me into trouble.

See, I was watching the episodes where Radar departs.

What a great character. So innocent, so sweet, so much like the Teddy Bear he cuddled in his bunk.

So in his last episodes — it was a two-parter from Season 8 — he kind of mopes. He’s not funny, not sweet, a bit of a drag.

I start thinking about his character’s arc. Specifically, did Walter O’Reilly in eight years of drama and pathos ever get laid? Ever even take a tumble with a prostitute at Rosie’s?

Radar left Korea a virgin! No wonder he was so mopey. Petting caged rabbits out behind the mess tent can only relieve so much stress.

I wondered if the trait extended to his real life. As always, the internet beckoned.

So I googled Gary Burghoff.

This from the TV Guide story hailing the show’s run: “Although nobody wanted to be quoted for the record, the feelings about Gary Burghoff's leaving were fairly unanimous: loved Radar, hated Burghoff. As summed up by one of the principals: 'Gary had personality problems. He always felt there was a conspiracy against him. He was rude to everyone, but if anyone ever said anything back to him, he'd throw a tantrum. He had frequent spats with his cast members, particularly with Alan Alda. Once Mike Farrell told him that his problem was that he could dish it out but he couldn't take it, and Gary said, “And I'm getting real sick and tired of dishing it out." The poor guy didn't even realize what he'd said.’”

So now that’ll be in my head every single time sweet, lovable Radar appears on screen.

Distraught, I then compounded my error with another bone-headed mistake.

I googled Klinger and found out he’s a big Republican!

I wonder if I can get a 45-year-old sitcom declared a pre-existing condition for the lobotomy I’ll soon be seeking.

Growing nostalgic for when TV was still stupid