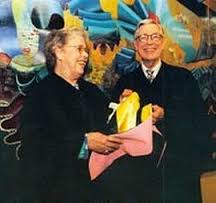 It’s been said whenever Sean Spicer takes the podium he is speaking to an audience of one, President Donald Trump.

I now know the feeling.

I was invited to speak to a Latrobe women’s social club at DeNunzio’s in The Arnold Palmer Regional Airport. What’s the only thing that could make it feel more hometown Latrobe than that?

Mrs. Fred Rogers would be attending.

Now, I can’t remember who told me that, if it was the organizer, a restaurant staffer or if I dreamed it, but as I was walking across the parking lot, I was struck by the recollection that Joanne Rogers was going to be among the 30 or so women.

She in 1951 married the man we should by all means call Saint Fred and was with him until his passing in 2003 at the age of 74. President George Bush in 2002 awarded him the Presidential Medal of Freedom in 2002 for his legendary role in children’s education.

One of my favorite Fred stories is how in 1969 he was called before U.S. Senate Vietnam War hawks to justify money spent on children’s television instead of bombs and bullets. They wanted to slash the PBS budget of $9 million.

He told of the importance of public television and how positive messages can shape young lives. Committee chairman John Pastore, who’d never heard of Rogers, said the testimony gave him goosebumps.

The funding was not cut, but instead increased from $9 million to $22 million.

He’d spoken for about six minutes.

And his wife was coming to hear me speak for 30!

I’m not saying I imagined strolling out of the airport with a check for $22 million, but I was optimistic significant opportunities might blossom. But it was risky. My talks include a sprinkling of profanity, adult content and nods to the joys of every once in a while going on benders with your buddies.

I decided against tempering my talk for my audience of one.

I was introduced and spied the crowd. Mrs. Rogers was at table 5!

An early test came when I deploy the risque line about questions posed by “Use All  The Crayons!”

I say it asks why are we here? What is the meaning of life? Then it asks questions only important to me. Questions like: If fans of the Grateful Dead are called Deadheads, what does that make those of us who revere the book Moby Dick?

Yes, I’d just inferred I am a Dickhead in front of Mrs. Rogers.

She roared with laughter. So did everyone else.

Another test came when I told the drunk-in-church story. I tell how Val is our Lutheran church organist and about how she almost ended our marriage because of the time I showed up drunk.

“Yes, I came stumbling right up the aisle right in the middle of the sermon. I was singing ‘Just a Closer Walk with Thee’ … And I wasn’t wearing any pants.”

Joanne — by now I felt we were on a first-name basis — looked alarm. Was I losing her?

“Really, I think the only thing that saved our marriage was I’d gone to the wrong church.”

Uproarious laughter. Then I confess the story is pure bullshit. None of it ever happened.

Telling stories like that is one of the benefits of colorful living. I tell them 911 could get a report of a man wearing nothing but a Speedo robbing the bank and they’d say, “Oh, don’t worry. That’s just Rodell being colorful again.”

It was a triumph. They loved me.

Afterwards, they lined up and bought up every book. A complete sell out. Many authors consider selling to 10 percent of the audience a success. I was right at 50 percent.

One of the last ones in line was Mrs. Fred Rogers and she was beaming.

I stood up and thanked her for coming. I told her I knew who she was.

“Well, we’ve never actually met, but my husband’s talked about you. He’s Jake, the plumber from Cooperstown.”

Cooperstown is a social club I frequent. To my knowledge Fred Rogers has never been there and I’ve never witnessed a seance summoning his spirit.

And what’s your name?

“I’m Betty. I retired from the Post Office. I remember you coming in to buy stamps.”

I use a pseudonym to spare her any public embarrassment. Jake and Betty aren’t their real names.

And they sure aren’t Fred and Joanne.

Oh, well. It was a truly beautiful day in the neighborhood. I made some new friends and enjoyed another euphoric reaction. I feel blessed.

And just because you every once in a while knock on the wrong door doesn’t mean you aren’t in the right neighborhood.

The killing in Mister Rogers’ Neighborhood

Email ThisBlogThis!Share to TwitterShare to FacebookShare to Pinterest
Labels: Arnold Palmer airport, DeNunzio's restaurant, Fred Rogers, Use All The Crayons!