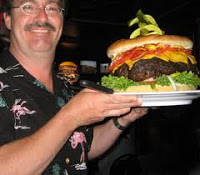 I was a guest at a social function at an area restaurant when a fellow conversant mentioned she was a vegan. She wasn’t belligerent or disdainful of my carnivore customs so I didn’t feel an urge to bop her on the head with a nearby salami.

Plus, it gave me the opportunity to use one of my favorite lines without it appearing rehearsed.

“I admire your discipline and your motives,” I said, “but the chances of me ever becoming a vegan are about the same as me ever resuming my virginity.”

I mention this today because Ray Kroc’s restaurant is now offering hamburgers with popular toppings that would infuriate Ray Kroc.

I’m talking about guacamole, dijon, cilantro and — brace yourself — lettuce!

And if there’s one thing Ray Kroc hates, it’s lettuce.

I know all this because I just forced my family to watch “The Founder,” starring Michael Keaton as Kroc. It’s terrific. You need to see it right away. I’ll watch it with you.

Did you know each and every day of the year, McDonald’s feeds 1 percent of the entire world population?

If my wife has anything to do with it, that number will be reduced by microscopic fractions.

Sympathetic to vegetarian impulses already, she now regard’s Kroc’s empire as pure evil. The movie is that powerful.

Almost as powerful as my near-weekly appetite for, say, a Big Mac & fries.

I, too, try and eat ethically, but sometimes my body just craves fuel that’s familiar.

For nearly every American that’s the Golden Arches.

It’s never great, but it always satisfies. So, in some ways, it’s like old M*A*S*H reruns I mentioned yesterday.

They’ll always be there when you need them.

Am I going to try any of the new fancy “craft” burgers McDonald’s is touting? Doubtful.

There are any number of great local restaurants that feature good burgers, and the ones I grill for myself and the family never miss the mark.

Plus, a really great burger is as much a result of situation as construction. I guess the best one I’ve ever had was when I was a kid on vacation at Ocracoke Island on the Outer Banks.

I don’t know where Mom and Eric were that day, but it was just me and Dad. I was probably 12.

I remember him getting the old Ford Fairmont stuck in a roadside dune about 3 feet in front of an big explicit sign that said, “DO NOT PARK ON ROADSIDE DUNES.”

The wheels spun, the sand sprayed. We were hopelessly stuck. I think we had to hike about five miles into town. Starved and grimy, I remember we passed two or three perfectly suitable restaurants until he found one to his liking.

The grill was behind the bar and the sizzle started right away. I don’t remember what was on that great burger. I just remember it being delicious and that the old man drank like 40 beers.

That puts me at odds with Ray Kroc, who despised lettuce the way my wife now despises him.

He demanded every burger be exactly the same: patty, precise equal squirts of mustard and ketchup, two pickles. No deviations.

And no goddamned lettuce.

There’s a hilarious scene in “The Founder” where Kroc is spying on a franchisee’s store when he sees the menu offering — horrors! — chicken. But what really sets him off is seeing a young man eating a McDonald’s burger topped with a leaf of iceberg.

As Kroc, Keaton sees the lettuce and channels greater rage than he did as Batman after the Dark Knight saw the Joker slay thousands of innocents.

His anger looks so volatile I feared he was going to shoot the hapless customer and then shoot the lettuce. Quaking with anger, he takes the lettuce burger and tracks down the franchisee on the golf course for a nasty confrontation.

Kroc heaves the burger at the offending restaurateur, insults are exchanged. It’s the only part of this otherwise outstanding film that didn’t ring true.

You don’t exchange insults when someone throws a burger at you.

You say thank you!

Then you eat the burger.