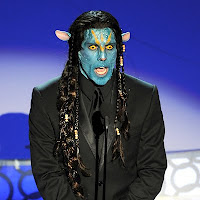 But the Oscars are tonight and the sentiments from this 2010 post still hold.

None of the nominees are compelling enough for me to watch the whole thing. I may tune in for the opening because I predict viewers and critics will savage Billy Crystal tomorrow and wouldn’t want to miss out on all the fun.

This isn’t counting anything from the Apatow/Aniston/Sandler Axis or others who earn millions making the kinds of movies they probably used to denounce back when they had youthful credibility.

For the record, some of my favorite movies from the past 15 years or so are “The Big Lebowsky,” “American Gangster,” “Hot Fuzz,” “The Shawshank Redemption,” “Big Fish,” “Gran Torino,” “Sideways,” and “Up in the Air.”

1. The Dark Knight's action scenes were great, and the sound was spectacular. You're just plain wrong on that one. Sorry.

2. Anne Hathaway in Ella Enchanted - wow she is smokin' hot. Especially the deep breath right at the end. Almost makes me want to see brokeback Mountain, as I hear she has a topless scene in it - almost.

Maybe I'll give The Dark Knight another chance, but it seems emblematic of today's films. The cuts are too quick and the directors don't give us a chance to savor the action. FX are no longer special.

But you're right on the money about Hathaway. What a babe. Right about Brokeback, too.