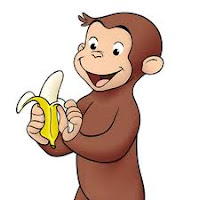 I think we’ve all had enough monkey business for one day.
Posted by Chris Rodell at 10:13 AM

That's one of those lines so good it made me wish I was unethical enough to claim it as my own. Love the Simpsons!

Apparently monkeys are to music what squirrels are to comedy. Everything's funnier with a squirrel. Or a midget. Or a guy getting kicked in the crotch. Theoretically the funniest thing you could ever see is a squirrel kicking a midget in the crotch, but to my knowledge that hasn't been attempted yet.

You started out fine, but then where were you going with this? Was there a point you wanted to make, or were you just writing to write? There was a beginning, the middle just lost any direction, and there was no ending (except the formula one you tacked on there). Why not tell us why you eat a banana the way you eat it and why people (or you) might find it odd, and then give us a reason it is okay or not -- maybe a solution to the problem (if there is one), and then tell us all to go to hell?

Had I known anyone would four years after I wrote the piece read it with such a discerning eye I might have taken pains to compose something more worthy of posterity. As it was, I took about an hour of my day, wrote something for free and posted it. Then I began to think what I'd write next for free. If this didn't work for you on any level, then maybe check back in four years hence to see if I've gotten any better.