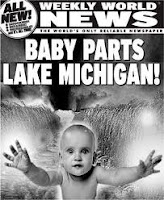 Russian scientists have succeeded in drilling through two miles of solid Antarctic ice to reach a lake that’s been sealed from human contact for between 15 million and 34 million years, give or take an eon or two.

They are hoping to find microbial life within so-called Lake Vostok that could hint that life could exist on the frozen moons of Jupiter.

If I could script it, lead scientist Valery Lukin would say, “It was found bookmarked to the page where Arnold Palmer says he remembers his first ace with more clarity than his first kiss because it meant more to him.”

Imagine what that would do for sales. Yes, finding my 9-year-old golf book beneath miles of ancient ice would be ... hmmm ... what’s the word?

It would certainly be better than finding Adolph Hitler.

Proving once again it’s impossible to out-crazy the crazies, Russia’s state-run news service, Ria Novosti is reviving a theory that Nazis sent a secret submarine to the lake to deliver the remains of Adolph Hitler and Eva Braun for future DNA cloning.

The report sounds like something you’d read in “The Weekly World News.” Favorite headline -- all together now! -- “Baby Born with Wooden Leg!!!”

I mention The News here because the diggings at Lake Vostok also remind me of another one of their great crusades: purifying the global air by simultaneously popping the tires on vintage cars from the 1950s. The logic is the gush of released air from 60 years ago would crowd all the bad air out of the atmosphere.

It is roughly 4,000 miles from the soles of your sneakers to the center of the earth. The deepest anyone’s ever drilled is 7 miles. What’s beyond that is mere speculation.

Here in Pennsylvania, thousands of my hillbilly neighbors are being enriched by Marcellus Shale natural gas deposits. What other natural wonders await down there?

These lakes are water created by pressure and warmth from below the ice. Who knows? Maybe there are perfectly pure pockets of ancient air.

Air from umpteen millions of years ago would be the respiratory equivalent of moonshine. It would be like 999 proof. One whiff and you’re 10-feet tall and bulletproof.

Because it was Capt. James T. Kirk that first told us that space was the final frontier, we’ve taken it at face value. We could have it completely backwards.

Our future may be beneath our feet. Maybe the world going to hell will lead the world to go to hell.

With climate change, extreme weather, Biblical flooding and drought, I’ve for years predicted that adventure vacations of the future will be anything above ground and out of doors.

So much of our discovery these days seems to hinge on the theory that sooner or later the surface atmosphere of Mother Earth will be too poisonous for people and plants.

Why else would Jupiter’s moons be in the mix?

All I know about Jupiter is the cruel rhyme my daughters use on me when they want to feel superior: “Girls go to college to get more knowledge! Boys go to Jupiter to get more stupider!”

Poor grammar aside, I have no intentions of validating their taunt.

So I’m looking forward to a subterranean future where neither lawns will need mowing nor snow shoveling. Put up a basketball hoop, a cool stereo, a pool table and a big screen TV -- cable, not satellite -- and it would be just like home.

Think about it: Earth, the ultimate man cave.

Can you dig it?