The night Ozzy didn't pee on The Alamo 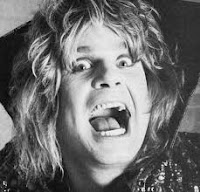 Today’s an important day in non-history: It was 30 years ago this evening when Ozzy Osbourne didn’t urinate on the Alamo. This may seem contrived. I mean you’d think just about everyday of the year could be remembered as someone not peeing on the Texas shrine. It’s just not something you do.
But it’s different with Ozzy. Part of his legend is that on Feb. 19, 1982, he is supposed to have urinated on the walls of the Alamo after a nearby concert.
It just didn’t happen.
I was looking through old stories to pitch and too late found this one, “Story of Ozzy at The Alamo is mostly all wet.” It ran in the Boston Herald in 2004. Had I seen it sooner, I think I could have found a magazine that would have seized on this anniversary. Alas, I’m out of luck.
But that doesn’t mean you have to be. Here, check it out. It’ll give you some smarty pants satisfaction next time anyone mentions Ozzy or brings up the infamous incident.
Thus, another blow struck on behalf of truth!

Officials at The Alamo are more than happy to discuss the legends and legacies that still seem to reverberate off the shrine's scarred walls like so many spent bullets. But there is one off-the-wall legend that they wish would just dry up and blow away.
Yep, the name Ozzy Osbourne is still getting people in Texas all, well, P.O.d.

"Oh, please, we'd rather not talk about that," says Laura Garcia, executive secretary at The Alamo who patiently and pleasantly fends off questions from writers and producers from around the world. "We just got a call from a documentary group that's filming a series about outrageous stunts by rock stars. They wanted to come down here and film and interview. We just told them, no thanks."

But thanks to MTV's hit series, "The Osbournes," there are days the name Ozzy Osbourne gets mentioned at The Alamo more times than Davy Crockett, and that just really, er, stinks!

"Oh, I get asked about it three or four times a day," says one guide. "More when a school group visits."
The kids, and many adults ask about it in a "Pssst! Hey, buddy, can you show me where Ozzy, you know . . ." sort of way

Well, the truth is that in this land of legends, no guide within or without the walls of The Alamo can show anybody exactly where Ozzy Osbourne drunkenly heeded nature's call on February 19, 1982, after a performance at the San Antonio Convention Center Arena. You know why?
Because it never happened.

I know, I know. Right now legions of devoted Ozzy fans are spitting out their cereal saying, "I can't *&#@! believe it!"

But it's true. Ozzy Osbourne never urinated on the walls of The Alamo. Had he, he may not have lived to become America's most unlikely father figure. The officials at the Alamo don't want to talk about it, but their friendly guides will.

"It's just not true," says one guide, who requested his name not be used for publication. "If he had, the police wouldn't have arrested him. They would have beaten him to within an inch of his life."
The Alamo, or Mission San Antonio de Valero, to Texans is understandably sacred ground. It is here that 189 Texans gave their lives rather than surrender to Mexican General Santa Anna and his army. The more than 2.5 million annual visitors understand this. The people who stroll through its buildings and beautifully landscaped grounds in the heart of San Antonio speak in reverential tones as they learn of the heroism of men like Crockett, William B. Travis and Jim Bowie and why the phrase "Remember the Alamo!" is still relevant 166 years after the last man died at his post that warm spring day. Its limestone walls were consecrated with the blood of patriots whose sacrifice is innately understood by schoolchildren, adults and even drunken English rock stars.

"What happened was he was with a bunch of band members after the show," says the guide. "They were dawdling and he had to go. When he couldn't get them to leave he just unzipped his trousers and went right where he was standing."

Where he was standing happened to be across the street from The Alamo at the stately, 60-foot-high Cenotaph. Erected in 1939 by the Texas Centennial Commission, the name Cenotaph means a monument erected in honor of a dead person whose remains lie elsewhere. He was arrested and charged with public intoxication. The next morning he felt something besides hung over.
He felt regret.

"Everyone believes he urinated on the walls of the Alamo and just went on his merry way. That's just not true. In fact, he felt terrible about it."

Just how terrible was reported in the Sept. 10, 1992, editions of The San Antonio Express-News under a headline that reads, "Ozzy thanks city for having him back." The article reads, "It's official: British heavy metal singer Ozzy Osbourne is donating $10,000 to the Daughters of the Republic of Texas -- caretakers of the Alamo, the Texas shrine that Osbourne is accused of defiling 10 years ago."

The article notes the arrest and the incident on the sidewalk near the Cenotaph and includes this statement from Ozzy: "We all have done things in our lives that we regret. I am deeply honored that the people of San Antonio have found it in their hearts to have me back. I hope that this donation will show that I have grown up."

Happily, it won't cost the rest of us that much to visit San Antonio. Its magnificent Riverwalk is one of America's great urban treats anywhere in America. It's crowded with fabulous restaurants like Boudro's and The Texas Land & Cattle Steakhouse, which, like many of the city's eateries, serves meals on barges that cruise up and down the festive 13-mile stretch of the Paseo del Rio.

The May 1999 opening of a top new resort provides fresh reasoning for Osbourne's uncharacteristic groveling. The Westin La Cantera Resort's been named one of the top 50 golf resorts in the nation by Conde Nast Traveler. Each September, La Canterra's 18-hole Jay Morrish/Tom Weiskopf course hosts is the site of the PGA Tour's Valero Texas Open, won this year by Loren Roberts. An even better test is the spectacular new Arnold Palmer design. It's challenging enough that some of the cliffhanger holes might have Baptist ministers sounding like raunchy rock stars.

Either way, the history and the present San Antonio have enough to ensure that every visitor leaves pleased, not, er, upset.

Email ThisBlogThis!Share to TwitterShare to FacebookShare to Pinterest
Labels: Ozzy never peed on the Alamo, Ozzy Osboure peeing on the Alamo

Standing "near" the centoaph and taking a leak, is not the same as peeing upon it. The original story sounds like a beat-up.

And if he had peed on the walls of the Alame, well...the place was used as an army barracks. It wouldn't be the first time the walls had been pissed upon, I suspect.

Mind you, Ozzie could have picked a more sensitive (and dicreet) place to relieve himself. I mean, when you're a man, the world is your toilet!

Interesting point about the barracks. Still, I'll bet the Texans minding the store would beg to differ.

And, hallelujah, about the world being a man's toilet. I try and avoid ever peeing under any roof.

Anyone who knows their Texas History know that the small chapel that adorns the many trinkets and souvenirs is not "The Alamo". The fort itself was a larger area that is what the True Alamo was. The fort is where many Texans (hispanic and otherwise) died in the battle and the subsequent days under execution orders from General Santa Ana. To say that Ozzy did not pee on the wall of the Alamo is somewhat true. He did not pee on the wall of the chapel that we imagine being the Alamo. That was an image conjured up in people's minds. The area where he peed is in fact sacred ground for Texans and historians. Was it the wall on the Chapel? No, it was not. Was it part of the fort and mission where Texans fought for freedom from Mexico, absolutely? So to add in the adage that he did not pee on the wall of the chapel of the Alamo therefore he did not desecrate Sacred Texas Independence ground is as misleading as the same notion that he did pee on the wall of the Alamo and shows lack of understanding of the situation. This article does qualify it, but it seems to dismiss it as irrelevant like many irresponsible journalist/bloggers do. Hey check my fact here. http://www.muzzleloadingforum.com/fusionbb/showtopic.php?tid/271817/

Thanks for your comment, my muzzle-loading friend. You make many good points, which I'll remember if I ever revisit. I was relying on the expertise of the people I talked to there.