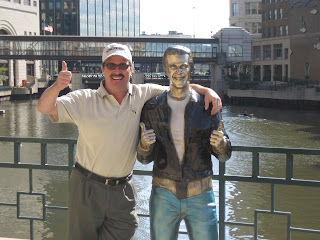 It’s been a disconcerting week for Steeler fans like me who need hearts heavy with hate for Super Bowl motivation.
Hate the Packers? It’s one of the most storied franchises in football. They shoved Brett Favre out the door when he became a recidivist jerk, a role I’m confident he’ll be fulfilling for at least the next five years.
Plus, I can’t recall meeting a single soul from Green Bay and, as a liberal, I can’t hate, disparage or kill what I do not know.
I do know dozens of darling people from Packer-mad Wisconsin. I spent a fall week there in 2008 on a glorious golf assignment. They wined and dined me with such relentless joy the Badger State vaulted to near the top of my favorite destinations.
They showed me Milwaukee. I had my picture taken with the Bronz Fonz. I reveled in burger heaven at Sobelman’s Pub & Grille. I golfed at prestigious Erin Hills and Whistling Straits. I ate the finest meals and drank free top shelf booze till the bourbon washed all the hatreds from my heart.
They did everything but offer me a free hooker.
(Prospective PR hosts take note: In order, I’d prefer redhead, blonde, bald chick, silver-haired granny.)
Ethical aside: I just spoke to Mrs. Renee Stallings Greater Latrobe High School journalism class about what I for lack of a better word call my “career.” We talked about stories, research, etc., but the class broke down when a sincere student asked me to discuss the importance of ethics.
Four days later and I still can’t quit laughing.
I was laughing so hard I was unable to mention the one relevant line I remember about the importance of ethics, one I try and share with aspiring journalists, but it applies to all professional disciplines.
“Once you get past ethics, the rest is easy.”
That’s a line from J.R. Ewing of the show “Dallas.”
Yes, Dallas. Now there’s something that gets my hateful heart revving.
And I’m talking about the town in general and the Dallas football team in particular. The only thing I like about Dallas is “Dallas.”
The Super Bowl is being contested in the massive Dallas ego dome that is Cowboy owner Jerry Jones’s gaudy $1.2 billion tribute to himself.
My fondest wish this entire football season was the Steelers would play the Cowboys in the Super Bowl. This would have pleased Jones.
Then the Steelers and their fans could have humiliated him buy buying up three-quarters of the seats and turning Cowboy stadium into a home game for the team from Pittsburgh, which is just what Steeler fans do. You’ll see on Sunday.
Then to complete the humiliation, the Steelers would win 52-3.
Still, having the Steelers there will be plenty humiliating to Jones, and that pleases me.
I travel enough that I have a good sense of how the country regards people from Pittsburgh.
My sense is this:
They love us!
It’s true. I refer to an illustrative anecdote from The River Bar at Blackwolf Run, part of the amazing Kohler complex in Wisconsin.
I was sitting there sipping a jumbo triple Jack Daniel’s on the rocks. A group of three couples came in and we instinctively decided to be friendly.
Madison residents up for a weekend frolic, they immediately embraced me when I told them I was from Pittsburgh. A big garrulous fellow threw his beefy arm around me and said, “Man, I’ve never known anyone from Pittsburgh who wasn’t a really great guy!”
I told him he’d yet to know me after three giant glasses of bourbon.
We laughed. They could tell my friendliness would only go up as the bourbon went down.
It may be difficult for those rare individuals who’ve spied me sober to comprehend (sitings of albino rhino are more widespread), but I’m way, way more fun after three big bourbons.
In fact, the world be a happier place if guys like me were encouraged to have bourbon for breakfast.
So what am I to do?
Here’s what:
Kill ‘em, Steelers! Take no prisoners. Beat ‘em like J.R. always beat Cliff Barnes, dirty tricks and all.
Sure, it’ll make my heart heavy to know a state full of people I like and admire for their cheerful generosity will have their feelings hurt, but they’ll get over it.
I didn't drink up all their bourbon.
Posted by Chris Rodell at 3:58 PM

I am trying to pinpoint why I liked this post so much...

My father grew up in Milwaukee,
My parents met at U of Wisconsin
Loved the state fair (smell our dairy air!)
Had a blast at the Dells...

I think it came down to this... you mentioned THREE of my favorite things:

Please read it over and over and over, Mark, until you're sure it's the multiple bourbon mentions that led you to so enjoy it. I recommend you read it while sipping a big glass of bourbon.

Thanks, man! I really appreciate you checking in and taking the time to flatter me with a friendly comment. I hope you're referring the blog to others of good taste.