Zsa Zsa & when it's time to go 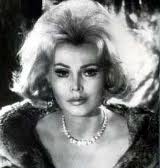 I’m seeking friendly subversives who’ll help me start a rumor that Zsa Zsa Gabor’s amputated foot is up for eBay auction.
Hell, I’d pay through the nose for a celebrity foot.
Gabor, once one-third of the most glamourous sister trio on the planet, celebrated her 94th birthday on Sunday.
And I’m again reminded of the cruel indignities of excessive age.
As many people die too old as do people who die too young. I think most everyone who’s ever been born would live conversely more full lives if we all died about 18 months before we actually do.
This puts me at odds with rascally Prince Frederic von Anhalt, Gabor’s ninth husband since 1986. His life philosophy reminds me of a great Robert Earl Keen song, “The Road Goes On Forever (and The Party Never Ends).”
The prince released a horrific picture of him presenting her a “Happy Birthday Baby!” cake days after the amputation, a drastic operation many anorexics might confuse with a novel way to lose weight fast.
The picture shows Anhalt beaming above an expressionless Gabor who with her left hand appears to be pawing at the cake’s pink icing flowers. Her once voluptuous body sprawls beneath a hospital gown.
It’s pathetic and should never have been made public.
He said he released the photo so “people can see that she’s not half-dead,” an odd unintentional play on the old glass half full/half empty debate.
At 94, the woman I remember most for playing Erika Tiffany Smith on “Gilligan’s Island,” looks way past seven-eighths dead to me.
Really, if you’re 94 and the doctors say the most prudent medical thing to do is to start, piece by piece, removing parts of you, I’d say it’s time to close the book.
In my observations the people who seem to enjoy life the least seem to cling to it the most. They go to desperate lengths to add days to lives spent in shadow.
This certainly wasn’t the case with the ever-vivacious Gabor, author of the 1970 book, “How To Catch a Man, How to Keep a Man & How to Get Rid of a Man.”
She flitted from marriage to marriage, role to role, and seemed to enjoy having her life play out on the front pages of National Enquirer. She joked her greatest role was that of housekeeper: “I’ve been married eight times and every time the marriage ended I got to keep the house.”
She made sensational headlines in 1991 when she slapped a Hollywood police officer over a routine traffic stop. She she did a funny send-up of the incident during the opening credits of the hilarious “Naked Gun” sequel starring Leslie Nielsen.
So it saddens me to see her slow death being played out as if its some virtuous sort of testament to an indomitable spirit.
No, it would be far better if she’d have died, oh, probably about four years ago.
Now, the best we can hope for is that her husband the Prince -- and that’s a story too tangled for snappy distillation -- loses control of her chair as he’s wheeling her out to the limo and she zips down the drive and out onto the freeway where, for reasons of slapstick impact, she gets run over by a runaway steam roller.
I swear if the doctors ever come to me and say, “It doesn’t look good. We’re going to have to remove a foot.”
I’ll tell them to forget it. I intend to die with dignity. They’re not taking a whole foot off me.
“Heck, doc, I’m only 5-9. I can’t spare even an inch.”
Maybe they’ll conclude the sensible thing to do is relocate the point of amputation.
Like at the neck.
Posted by Chris Rodell at 10:37 AM