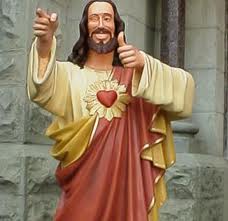 I remember reading what to me seemed a profound Biblical phrase from when I was about 25. My recollection of the precise wording was: “He who uses well what he is given shall be given more.”


My memory of it is crystal clear.
So I was surprised this morning when I went to look it up and saw that for nearly 25 years I’ve had it all wrong.
The passage attributed to Jesus Christ that struck me as so indelible is from the book of Matthew 13:12 and says, “For to him who has will more be given and he will have abundance; but from him who has not, even what he has will be taken away.”
I don’t know why I’m surprised I had it wrong. I often forget the “not” part in many of the Ten Commandments, oversights that are forever getting me into hot water with my wife, my neighbors and, I guess, the Almighty rule maker.
And -- sorry, Jesus -- my version’s better. It’s more concise, makes more sense and doesn’t ramble about in such confusing fashion.
What do you expect? He’s just a carpenter.
I’m a professional blogger, well, as professional as any blogger who doesn’t earn a dime relentlessly blogging can be.
So let’s go by my phrasing and issue a report card for over the past 20 years. That’s a fair enough time for a reckoning. What have I apparently used well enough to be given more?
Let’s run it down:
• Spare change -- If you ever need a quarter, I’m the man. I’ve always kept piles of change handy in my life. Ever since 1986, I’ve always tossed the daily change into an old wine carafe. Once it fills, I count it up and usually get about $115. So if my interpretation of the Biblical phrase is true, I’ve done well with change and have been given more.
• Friends -- A morose friend of mine was saying the other day he believes we only have one real friend in our lives. Nonsense, I told him. I’ll bet I have about 50 really good friends -- and I’m not talking about people whose mere company I enjoy. I have hundreds of those. I’m talking about 50 people who will without question help me do things like bury bodies in the woods. I tried to cheer the guy up by telling him, “Hey, there are probably two or three people right in this bar that are your friends -- and you’re not even very popular.” I’m glad I have so many good friends because that man is now very pissed at me.
• Wives -- It gets tricky here because, to paraphrase Bill Clinton, it depends on what the definition of the word “use” is. I’ve only had one wife and, believe me, that’s plenty. But have I used her wisely? I know some very religious men who insist the wife should be submissive. These men, one in particular, must use their wives very well because they are working on acquiring their third and fourth ones. I’m convinced most men don’t want real wives. They want mail-order brides unfamiliar with the English language. Maybe I should try that. I could really use a mail-order bride.
• Golf balls -- This confuses me because I don’t use a golf ball very well. I can’t hit it straight, far or near where I aim. Yet, I have hundreds of them.
• Folding money -- I think this is the source of why I remembered that phrase with such clarity. It seemed like such a simple roadmap to riches. Use it well and you’ll be given more. If that’s so, then it’s damning evidence that I’ve done poorly with my money. I believe I use my money wisely. I’m not extravagant. But frets about money have dogged me my entire life. Life is not giving me more and I’m certainly not going to demean myself by running around after it.
• Time -- What gives with this? I’m a man with all the time in the world. I’ve fatigued proselytizing Hare Krishnas who fled my house saying, sorry, time to run. I’ll spend 15 minutes talking nonsense with the guys who work the butcher counter at the local supermarket. But have I used my time well? I’m 48 have no achievements and made no mark. I’ve had a hell of a lot of fun, but is that a wise use of my time?
Maybe one day it’ll all make sense, but it seems the one thing in my life I’ve really used well is, alas, my cents.
Posted by Chris Rodell at 10:36 AM

Ha! You're in for a world of hurt, my friend, if you run up the credit card on a mail-order bride.

Credit card? Why do you think I've been saving all that pocket change all these years?