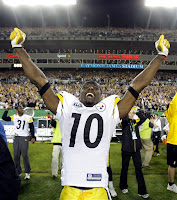 • If you’re a Democratic-leaning fan of the Pittsburgh Steelers, as I certainly am, the last six months has brought wave after wave of good news. The Steelers began the season playing compelling football against what was statistically the toughest schedule in the NFL. This coincided with a riveting presidential campaign. Then Steeler owner Dan Rooney, a lifelong Republican, endorsed Barack Obama and Obama won. Then Obama, a lifelong Chicago Bears fan, endorsed the Steelers and they won. The only thing that could make today any better is if the Groundhog pops up and in flawless English announces a radical economic recovery plan that confounds experts who all agree it will correct the economy in four weeks -- and that spring is on the way.

• The opening ceremonies for the game were among the most moving I’ve ever scene. Jennifer Hudson sang the national anthem with touching poise. And it was a stroke of genius to bring out the heroic crew from the US Airways flight that landed in the Hudson River. I tingle every time I’m reminded of that day.

• Did I miss it, or was there not one single monkey commercial during the game? I’d run out and buy truckloads of a feminine hygiene products if a funny monkey subliminally suggested I should.

• I acknowledge my priorities are way off kilter when I admit that I’m now having trouble ranking which was better news: the Hudson heroics that saved the lives of 155 souls or the Steelers sixth Super Bowl victory.

• One of the great things about being a Steeler fan is how generally well regarded we are in media and anecdotally around the country. I was in Wisconsin doing a golf travel story this fall and met a friendly gang of golfers who warmly embraced me simply because I told them I was from the Steel City. The one guy threw his arm around me and said he’d never met anyone from Pittsburgh who wasn’t a really great guy. I pointed to my giant glass of bourbon and ice and told him he’d never met me after three of these. I hope I didn’t do anything to ruin the guy’s perfect record.

• Bruce Springsteen’s halftime show was fantastic. It rocked, it was hilarious and showed all the joyful exuberance that makes him such an enduring classic. At one point he ran across the stage and slid crotch-first right into a heavy camera. If the 59-year-old rocker would have gotten up wobbly and ashen-faced from that stunt, it would have been the funniest thing any of us had ever seen. But the Boss was unfazed. Perhaps he’d borrowed a cup from one of the locker rooms.

• Springsteen is one of the coolest guys on the planet, but he’s not even the coolest guy in his own band. That would be Little Steven Van Zant. Not only does he play guitar in the E Street Band, he also played Silvio Dante for the entire run of the “The Sopranos.” I always imagine James Gandolfini coming up to him on the set and slyly asking, “So what’s Springsteen really like?” And Springsteen coming up to him back stage and wondering, “So what’s Gandolfini really like?”

• The color commentators for NBC’s main desk with Bob Costas and Cris Collinsworth couldn’t have been more colorless. Tony Dungy (great man), Mike Holmgren (lumpy bore) and Matt Millen (failed idiot) had me wishing my fancy remote came with a snooze alarm every time they opened their mouths. God help me, it actually had me wishing for some of the ESPN or Fox sports gang buffoonery.

• I’d written earlier about how if the Steelers win, two of the most powerful and envied institutions on the planet -- the U.S. and The Pittsburgh Steelers -- would be led by charismatic black men and how I planned to taunt racists I know with the thought that blacks must be genetically predisposed to lead. For the first time in my life, I’m looking forward to running into some racists today.

• One of these days I’m going to learn how to do that little hot link thingy instead of vaguely referring to past posts. It probably won’t be this week.

• I’d predicted that the Steelers would win 33-10 and that after the game everyone would be talking about Ben Roethlisberger being among the best in the game. I was half right.

• That thing about me wondering if those Milwaukee guys not liking me after those three big bourbons? Nonsense. Those guys loved me. I’m always a lot of fun after three bourbons. Heck, I think I’m going to have three big bourbons for breakfast this morning and just see what the day brings.
Posted by Chris Rodell at 8:00 AM

Well, Chris, it was indeed a super Super Bowl day all around and you've made me laugh! Now get to work on that ms and queries! ; )
hugs

My CRUSH was deep and vast for the Steelers....but if you place your Messiah along side the Steelers you will eventually lose. Chris, can't you leave out politics just once. Why must you place it in when talking sports. Just say it was a great Super Bowl and be done with it. That is all.

Kimmi -- Thanks! I'm working. I'm working. Today's query launch day. Cross your fingers and hope those virtual gummi bears are on the way.

Anonymous -- The punishment for your cowardly impudence will be meted out in Athens this spring . . . I think.