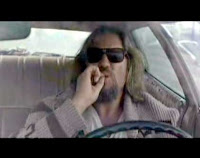 I want to assure readers of this blog, which now includes at least two guys named Ronald, that I have no plans to drug test them. This blog will unconditionally continue to welcome both the sober and the so totally baked that they’re still giggling over the above picture of The Dude.

I’m doing this, in part, because I’m hoping to lure swimming legend Michael Phelps to jump on in. The water here’s fine.

Had Phelps, 23, been a reader earlier this summer, he wouldn’t be feeling compelled to bow and scrape before the nation’s purity police after a party goer snapped a picture of him snorkeling a bong and then sold the photo to dastardly editors at a British tabloid.

Who knew some pot smokers could be so lacking in scruples?

To me the absence of numerous other pictures indicates he took a single hit merely to be sociable. I see nothing wrong with that.

Of course, I’m on record as believing that those of us who work in places that don’t drug test have a social responsibility to test drugs on behalf of those who cannot, so judge for yourself.

Now USA Swimming has suspended him for three months and Kellogg’s is dropping its sponsorship. Both are ridiculous overreactions to a minor infringement that can almost be considered quaint in light of some of our other coke-sniffin’, spouse-abusin’, rootin’ tootin’, homey shootin’ felons who still earn millions playing professional sports for teams like the Dallas Cowboys.

It’s impossible for me to fathom the dedication it took for Phelps to get to the level he reached in Beijing. He trained every single day for five straight years. The result was an Olympic performance none of us will ever forget.

Heck, if America were at all serious about winning the so-called war on drugs, it would sentence anyone caught selling or using the stuff to work out with Phelps.

Now with the suspension, he’ll miss a March event and will be behind schedule for the July world championships in Rome. If he is to compete, it will be a grueling uphill swim, not unlike what a salmon must go through to spawn.

Of course, the salmon has a carnal motivation for all that work. Phelps does not.

That’s why six months ago I laid out a clear and wise path for Phelps to follow. I said he needed to sink his remaining swimming ambitions and become Arthur Bach.

Arthur was the Dudley Moore character in the title role of the 1981 movie of the same name. He played a happy, wealthy drunk who left $1,000 tips, was kind to and revered by his staff of flunkies and drivers, and generally laughed through life as though he were being tickled by a giant invisible feather.

As I correctly foresaw, further competitive swimming and trying to live up to his image would only dim Phelps’s luster.

I still maintain the thing for him to do is take the $10 million in sponsorships he’s already reaped and use it to build a huge mansion near the Inner Harbor at his Baltimore hometown, a great place to party. The house should feature an enormous and lavish pool with waterslides, a lazy river and an open invitation to all the inner city and neighborhood kids to stop by anytime they’d want. An adults-only section could feature the world’s largest swim-up Hooters.

It’s too bad he didn’t hear about my idea before he decided to try and live up to all the unrealistic expectations. Because now he’s trapped.

He’s forever at the mercy of those uptight stick-in-the-muds and their narrow 1950s definitions of how our heroes should behave.

I wish we could take the whole bunch and retroactively drug test them to see if they’ve ever taken a social hit on a bong or ever dabbled in recreational drugs.

hee, but the question... did he inhale?

I still find that didn't inhale to be a compelling excuse.

Of course, I’m on record as believing that those of us who work in places that don’t drug test have a social responsibility to test drugs on behalf of those who cannot, so judge for yourself.