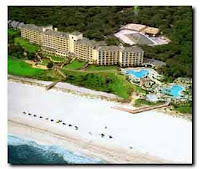 Despite the toilet economy, there are still plenty of resorts that’ll pay to zoom travel writers like me around the planet for free. They do so in the hopes that we’ll write about them, a magazine or newspaper will run our stories and that people who worry about making their next mortgage payment will unholster their credit cards and dash off to the destination based solely on our words.

Me, I’d be thrilled if more of those people simply started buying more newspapers and magazines.

But I don’t make the rules. I just play by them. In the past month, I fielded offers to travel for free to Galveston, Myrtle Beach, Cabo San Lucas and Dubai. I declined them all. It wouldn’t be fair to the hosts for me to accept the cushy freebies without some likelihood of a pay off, and it certainly wouldn’t be fair to deprive my lovely wife and our daughters of four days to bask in my wisdom, my humor and the happy opportunity of having someone around to viciously ridicule for merely being born a boy.

I accepted one to lovely Amelia Island, Florida, because I’m optimistic I can find someone who’ll run the eventual story about the great golf, dining, beaches and playtime.

So I’m sitting here watching the sun come up over the Atlantic and writing a post that I know will infuriate my jealous buddies, puzzle journalists who still fret over dainty things like ethics and dumbfound my wife who still thinks I’m living some kind of scam that’s bound to result in midnight calls requesting costly bail.

I love to travel and meet interesting people.

I flew from Pittsburgh to Jacksonville through Atlanta. The first leg of the trip was with a woman who was terrified of flying. The second with a man who isn’t afraid of anything.

The woman was a sweet grandmother. That conjures up images of blue hair, rocking chairs, knitted doilies and automatic AARP subscriptions. But she was very pretty and must have had the first of her three children when she was a teenager.

I’m not saying she was hot, but if the plane engines happened to suck in a flock of geese I at least would have considered proposing we dash into the rest room for one last sport boink before the plane cratered into the Smokies.

Even landing didn’t stem her fears. A deliberately cruel co-worker told her that she was bound to get lost in Hartsfield. Nonsense, I said. I assured her she could find her way on her own, but my gate was right near hers and I’d be happy to escort.

She was so grateful I felt like I’d earned a Boy Scout badge. It reminded me of another time in Atlanta when I happened upon a confused traveler wearing exotic garb and carrying a bag that said she was from Egypt. She was standing at the base of one of those towering escalators and seemed frozen by an alien technology.

I sensed her fears and offered a reassuring arm. She seized it and off we went. By the end of the long ride, she looked buoyant enough to want to give it another go. It made me feel good at the time knowing I could shepherd an American guest through a scary new experience.

Now I wonder if I was wrong and she was just some village idiot. I mean, really, she flew overseas on a big shiny bird, saw dozens of other travelers get on the escalator without getting chewed to bits and she couldn’t figure it out herself?

I imagine her today working at some Department of Motor Vehicles making life hell for people who have to put up with her bone-headed bureaucracy and wishing a guy like me would have just left her to rot down there at the bottom of the escalator.

The guy next to me on the next leg of the flight was a U.S. Marine and I was thrilled. I always look forward to meeting anyone who’s served and can always count on them being uniformly great guys.

John didn’t let me down. He told me about having served all over the world and in the first Gulf War. He was raising a 16 year old daughter all by himself after his wife got fed up with military life and just up and left with another guy while he was serving. He was an airplane engine mechanic who’d turned down a lucrative job working in Key West at a factory that makes bombs. He said he didn’t want to earn a living manufacturing things that killed strangers.

I told him about my daughters and my so-called job.

He couldn’t have been nicer and kept saying, “Guys like me and you . . .” I was flattered, but wonder if maybe he meant men who at one time had been involved in the biological function of contributing to conceiving daughters.

I can only aspire to be a guy like him.

I bought us a couple of $7 beers and gave the flight attendant $16. She said I’d given her too much. I told her it was a tip. As we were landing, she came back and gave us two more beers.

This trip was going great!

At Amelia Island Plantation, the group meeting confirmed what the itinerary had hinted. I was the only male among 15 writers. I was hoping some guys would be along with whom to golf and joke and do guy things. I love a guy golfing trip. But it was not to be.

But the ladies are all wonderful. They treated me so well at our introductory dinner. They laughed at my jokes, asked insightful questions about my career and seemed pleased that I did things like hold doors, listened attentively and ate with silverware.

It couldn’t have gone better.

This is one of those times when it’s absolutely electrifying being me. Because I know I can pull off being a dashing gentleman for about two hours. I can charm a group of women with my manners and wit over the course of cocktails and dinner.

Then at any minute during any exchange I could say something so reckless, so offensive, that I’ll be the week’s pariah, shunned by more than a dozen women who’ll disdain me as the living, breathing embodiment of their worst suspicions about my beleaguered gender.

I don’t know when it’s going to happen. I don’t know what it’ll be. But it’ll probably be spectacular and it definitely will be asinine.

I’ll keep you posted when it does.
Posted by Chris Rodell at 12:08 PM

CR. I am sitting in a bar at a Holliday Inn in Brunswick Georgia. Is this where the Brunswick Stew came from? Any way. Just remember that Mincey will do any travel writing you can't handle. Will be passing through Jacksonville tomarrow. Are you still in town? If so. Call chuck and get my number. I would stop and buy you a couple beers. Cheers
Harold

Ah, sorry, but I'm vamoosing early tomorrow. Just a short trip. I'm glad you checked in, though. Maybe next time the timing will be better.