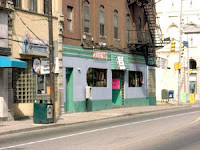 I love watching the game with the girls. I don’t mind explaining basic football terminology. I don't even mind it when on a crucial third and long the 2-year-old crawls into my lap and insists I read to her Dr. Seuss’s “The Things I Think I Think.”

But there’s a part of me I’ve nurtured through decades of zero responsibility and dubious judgment that misses watching the biggest game of the year out with the boys. That part of me would like to jaw about complex strategy, football history and unleash wanton profanities at the brain-dead refs.

Jack’s Bar on Pittsburgh’s South Side is open 365 days a year and is one of the city's most raucous taverns. It has a great jukebox and a lively clientele of inebrients who bring boozy spice to every conversation.

The bar was packed with Steeler fans. Every stool was occupied except for clear down at the end where five vacant seats stood between relative civilization and menace.

And when I say profanity I do mean singular. He didn’t use a barnyard array. It was exclusively the word I’d heard an off-color country singer in another bar long ago refer to as “The Universal Adjective (“I lost my f-ing job, I lost my f-ing wife, the universal adjective is f-ing up my life...).

Finally, the mousy guy got up and skittered away. That meant I still had a five-stool Maginot Line between me and the old lout. I was about done with my first beer. I could have downed it and left, but I have a rule about always drinking at least two beers in any bar. Drink just one and you look like a tourist or prey.

Turns out he was a friendly Steeler fan. The guy went way back and knew beloved Steeler patriarch Art Rooney Sr. He told some great football stories. One stool later he told me about his kids, his grandkids and how joyful it is to share with them what he called “jump hugs.” That's when the kids run clear down from one end of the house and explode into his arms.

He was a professional window washer who by the time he was sitting on the stool right next to me told me about the harrowing tragedy 30 years ago when he nearly got blown off a city skyscraper and about the one poor guy who did.

Any more than two and you’re just wasting time.
Posted by Chris Rodell at 12:33 PM

Does your column seem better to me because I'm a few hundred miles away from Pittsburgh? I don't know, but I enjoyed it just the same.

I checked with my Latrobe buddy, also Ronald, and asked if he was out of town. He said nope. That means I have at least two Ronalds reading my blog.

Thanks so much for checking in. Let me know if you ever get closer to Pittsburgh and I'll join you for an Iron City.

Kimmi, one of these days I'm going to be courageous enough to amend it to a four-beer rule and just see what happens.