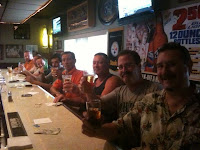 Wicked storm has me fearing for my life in my 2nd story office. Might hide in basement. Happily, that's where the bar is. And #Bucs are on. Safety first!

That was the 200th tweet from the past month at @8days2amish. A friend saw it and requested a picture, which I’ve posted above.

It’s the first glimpse I’ve ever offered of The Pond’s interior. That’s Dave, the owner, on my left, and on my right one of the seven Regular Joes, all of whom are helpfully named Joe.

The rest are all buddies who I wish were named Buddy.

The past four weeks were historic to my Twitter account because they demolished my conceit of keeping my total tweets under 1,000 as it’s been for nearly two years.

I figured 1,000 was a nice round number and I could achieve pure Twitter essence if I’d frequently and ruthlessly winnow out the weaklings as I added fresh sparklers.

But a host of friendly new followers -- one of them high profile celebrity babe Holland Taylor -- has led me to sharpen my radar for Tweet-worthy thoughts and, of course, plaster my office walls with gorgeous Holland Taylor posters.

“The great thing about your Twitter feed is it’s just you. You don’t link to other stories or engage in conversation. You just post these idiosyncratic little bolts of wit.”

I was highly complimented when Matt Stroud told me that. He’s a great writer and friend who is succeeding as a freelancer despite bearing the occupational burden of having once been a student of mine.

I was heartened to hear him say that because that exactly sums up my Twitter aspirations. I want my twitter feed to be full from top to bottom with engaging and offbeat thoughts, a VIP pass to my brain, if you will.

In the last month, I posted nearly 200 tweets. So Twitter is now officially another one of those things I used to relentlessly mock in which I’m now fully engaged.

And I tingle and think sweet, happy thoughts about you any time one of you retweets one of my posts to your followers. Same goes for anyone who refers people to my blog.

Means the world to me.

I could say more, but I’ve already exceeded 140 characters.

Here are two dozen of I think were the best of the month. See if you can guess my favorite (answer at conclusion).

• I'll bet 98% of men are content using just 15% of their brain as long as another comparatively inconsequential organ keeps on giving it 110%.

• I've never seen a white supremacist who's made me, a fellow white, feel the least bit superior.

• Does anyone else wonder if all the other kids made fun of him because Jeremiah was a bullfrog?

• Some patriot should tailor the lyrics of "The Star-Spangled Banner" to the theme from "The Price is Right." It'd be very catchy

• I suppose it's immature of me to even pose the question, but does anyone know if the nation of Turkey has a national bird?

• I've lived a long time but I've never known anyone who when they were young & their heart was an open book used to say live & let live.

• Pundits refer to Ohio and Pennsylvania as swing states. But Wisconsin has the most playgrounds per capita. It is THE swing state.

• Anyone know if ObamaCare will cover the years of intense psychological care needed by Conservatives driven crazy by Supreme Court ruling?

• Global warming will be solved in 15 years when NASA engineers figure way to move Earth farther from the sun. Days will be longer, too.

• Reporter #ChrisChristie called "stupid" should have responded in singsong voice, "I know you are, but what am I?"

• Scientists will in 10 yrs figure way to harness hate as renewable energy. Good: it's green. Bad: Driving someone crazy will be civic minded.

• How come a single camera lens isn't properly referred to as a camera len?

• Instamacy is the mutual attraction so powerful it causes consenting adults to leap into bed moments after first locking eyes.

• Despite the obvious mathematical inconsistencies, a game of 8 Ball played between two naked men is still called 8 Ball.

• Starry-eyed singles who date someone proficient in detonating pyrotechnics are apt to go out with a bang.

• It is entirely possible to simultaneously give someone both a rump roast and a bum steer.

• Happy 94th birthday to a man who accomplished more during 27 years in captivity than I've accomplished in 49 years of carefree freedom. #Mandela

Lots of fun word play in this batch. And I like the one about Anderson Cooper because it has, I think, a certain deftness to it and I’m fond of any topic that let’s me take a blast at the idiot Trump, as I did here last June.

But I think I have to go with the Mandela one. It’s self-deprecating and makes a point about this monumental man who is second on the list of people with whom I’d most like to have a long, boozy lunch.