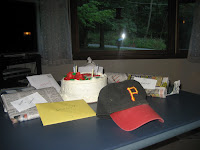 The stockings aren’t hung by the chimney with care and St. Nicolas is no where in sight.

You can stand in our doorway and demand figgy pudding until you’re blue in the face. You can go. You won’t get some.

No Black Friday sales stampedes, no wrapping, no in-laws, no Savior-thanking hoo-ha.

Merry Christmas in July! It’s the secular essence of the holy day everyone loves for all the wrong reasons.

It’s only 153 days until Christmas. That means it’ll only be about 54 days until our area retailers begin cramming Christmas down our throats. It’ll be sales, displays, carols, and mercenary goodwill before they even put out the Halloween candy.

Just thinking about Christmas in October through December raises my blood pressure.

And I’m not talking about the sacred parts, which I enjoy. I love when duties ease and there’s time to bask in soulful understanding about why Christmas really matters.

That lasts about 30 minutes. Then it’s back to strategizing party visits like Ike did on D-Day.

That’s what makes Christmas in July such a subversive pleasure.

I started doing it for the girls about five years ago. I thought it could be a sort of surprise poor-man’s Christmas, which makes perfect sense because I’m a very poor man.

What’s great is the expectations are absolute zero. In fact, as I type this our daughters, ages 11 and 6, don’t even know it’s Christmas in July.

In about 20 minutes, I’ll begin blasting Bob Dylan’s 2009 oddball Christmas carol collection, “Christmas in the Heart.” I love Dylan, but hearing him sing, “Here Comes Santa Claus,” “Winter Wonderland,” and “Must Be Santa” in July is perfectly surreal.

Heck, given his nonsensical interpretations of his own hits, any more hearing Dylan sing “Blowing in the Wind” is perfectly surreal.

The jarring sounds will cause such a clatter, the girls will storm out of their rooms to rage. Their instinct will be to shout at me for waking them and, even worse, waking them with Bob Dylan.

Then -- hallelujah -- they’ll see the Christmas in July card table, the “Merry Christmas in July!” cake surrounded by all the newspaper wrapped presents that include the plastic DVD crate containing the video store rental of the classic “A Christmas Story.”

Part of that is because I don’t do it every July 25. Not having it every year allows forgetful loved ones to be surprised when it suddenly reappears without any typical holiday hype. That’s the beauty of Christmas in July. You make up the rules as you go along.

For instance, one year I bought for a centerpiece a lovely mistletoe and roses floral arrangement. This year I didn’t want to risk feeling stressed, so I instead used my Pittsburgh Pirate ballcap.

It’s nice, too, for Val because for traditional Christmas she does nearly all the shopping, all the cooking, all the cleaning and all the fretting.

Really, with me doing all the drinking, it’s a wonder it bugs me so much.

So I get her a nice bottle of wine and a card thanking her for all she does.

You know what the best part of Christmas in July is?

Telling people you’re shopping for Christmas in July. You get a real charge out of sharing the idea with people. They seem so charmed.

I think that’s because we could all use a little more year ‘round Christmas, but none of us wants to go through any more Christmas to have it. So it’s nice to take maybe one day a year to have a little Christmas without all the hell and the hassle.

It’s nice, too, because it’s a momentary break from having to think about gun violence, pedophiliac coaches and the national heartbreak of “Twilight” actress Kristin Stewart hooking up with snakey director Rupert Sanders.

And, you know, for just one day it really ‘tis the season.
Posted by Chris Rodell at 8:36 AM