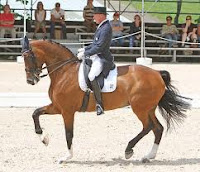 My interest in the Olympics ratcheted up another notch this morning when I saw Ann Romney has a horse that’s competing and the horse appears to be gay.

I don’t know if horses can even be gay. For all I know, maybe horses are like that Chik-fil-a guy and have imposed laws preventing horses from becoming homosexual.

Maybe they’ve elevated the pray-the-gay away thingie to an art, although it’s hard for me to imagine a horse seated with its hooves folded in horsey prayer.

And I know it’s insensitive of me to judge any being simply by how it looks.

But the horse is certainly flamboyant and behaves like a direct equine counterpart to many of the exuberant gay people I wrote about here on the day last month when my family and I wandered right smack into the middle of Pittsburgh’s Gay Pride Parade.

That seems to be the case with the horse the Romneys for reasons I can’t discern named Rafalca. Their sons carry the more conventional handles of Matthew, Joshua, Benjamin, Craig and the sort of screwy Taggert, who was clearly the family favorite because Tag is always it.

Couldn’t find it anywhere. It’s probably wishful thinking, but I hope some enterprising reporter enlivens the Olympics by revealing Rafalca means “Obama’s a Muslim” in some exotic tongue.

The 15-year-old German mare will compete at an event called dressage. I’m eager to learn more, but from what I saw I’m surprised the contestants don’t wear frilly horse tutus.

I’m not kidding. Dressage is, in fact, considered horse ballet, which may be why I thought the horse appeared to be gay. It pranced around. It flitted about. It preened.

It behaved nothing like any of the of the horses I’ve seen in the John Wayne movies. It looked like the kind of horse who’d refuse to drink from a common trough and would instead sip from fine China tea cups with its pinkie up.

I’ll watch, sure, but horse ballet sounds like a waste of a good horse. I think big strong animals should race or compete to see which one can pull carriages with the most beer.

Learning about offbeat new sports is one of the things I love about the Olympics, and love ‘em I do.

I’ll be glued to the set for tonight’s opening ceremonies and will be an avid viewer throughout the games.

I find it all so compelling. There’s so much pageantry, drama by highly skilled competitors who come from around the world

If it weren’t for the endless hours of NBC promos, it would be humanity at its best.

Seeing Ann and Mitt traipsing around London has been entertaining, too. He’s looking like a Gold Medal shoo-in for most gaffes. One London tabloid had the page one headline: “Mitt The Twit.”

I know we’re not supposed to bash the Romneys for their wealth, their car elevators, their Swiss bank accounts, etc.

That’s the American way, right? We all want that, don’t we? It’s capitalism at its unchecked best, baby.

But there’s something jarring about a potential president who co-owns a horse so refined it competes in a precious Olympic event few of us have ever even heard of, and comports itself in ways that make it seem too snobby to even pet or offer an apple.

It’s not bad when I have trouble relating to the Romneys.

But I think it’s going to be a problem when voters realize we can’t even relate to their horse.

Ha! I should send my stories to you, Keith, prior to publishing. I'm sure you'd have great suggestions. Love the neigh away the gay!

Pleased you like the "Tag" line, too. A redroom.com friend says he likes monkey ballet.