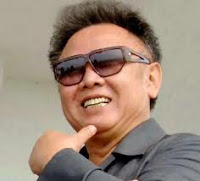 I posted this on my 8days2amish twitter account with no intentions of re-posting it here. But it led to such a surge of readership I thought there might be some interest for it here. This reads differently from one of my usual posts in that it was written with the intention of Sports Illustrated Golf Plus running it. The editor there has run my stuff before and always gives it a considerate look and a friendly reply. He said this was a little too edgy for him. I remember the 2010 rejection because I'm rarely anyone's edgy. And isn't this beccoming a dandy year for tyrants -- bin Laden, Khadafi, KJI -- heading to hell? Been a tough year, but that death trifecta's been great.
Many narrow-minded American golf fans have been upset by the onslaught of talented Korean golfers crowding the LPGA leader boards.
They ain’t seen nothin’ yet. Because the world’s best golfer now has time to play more and if past ambitions are any indication, he’s bound for the PGA Tour.
It’s soon-to-be retiree Kim Jong Il, the despotic president of North Korea.
State run media reported in 1994 that Kim was eager to try golf on his nation’s first course when it opened near Pyongyang. The results stunned the world.
The first time he ever played, Kim is said to have shot a jaw dropping 38-under-par in a round that included 11 holes in one.
It’s impossible for a non-golfer to appreciate the staggering scope of this achievement. For perspective, I’ve been golfing an average of about 25 times a year for 35 years or so and have never had a single ace.
That’s about 15,750 aceless holes.
Kim played 18 holes and snagged 11.
Two of the greatest and most prolific golfers ever, Arnold Palmer and Jack Nicklaus, have only had 20 and 19, respectively.
Of course, this shouldn’t be surprising. This is a man so powerful his subjects believe the weather is controlled by his moods and his body so evolved it produces neither urine nor feces, a bit of a pity, perhaps. You’d think the sprinkled tinkle from a body so divine would be nourishing enough to feed the millions who are starving to death under his tyrannical rule.
But having a man of Kim’s accomplishments would be a boon for the PGA Tour, a realm so priggish it spent the entirety of the 2010 season rattled by the private shenanigans of Tiger Woods.
Golf’s never had a real villain and Kim’s a real villain. He regularly cracks the top five of the world’s worst despots lists. There’s rampant starvation, disregarded international nuclear weapon treaties and cruelty and eccentricities grand enough to smack of sheer lunacy.
From 1993-94, he was Hennessey’s best customer and spent $750,000 a year to import the stuff to a country where the average worker earns just $900 during that same span.
So having him on the PGA Tour would not be without its PR challenges.
Still, there are sound reasons why Tim Finchem should consider recruiting Kim to try his hand at Tour Q school.
It is reported in all the school text books that when Kim was born on February 16, 1941 -- he’s an Aquarius just like me! -- that spring suddenly bloomed and the country was showered with a spontaneous outbreak of rainbows like what happens in the Care Bear stories I read to my 4 year old.
And we all know how cool that looks on hi-def.
For ratings purposes, it’s a can’t miss for the PGA. People would tune in for the controversy, for the aces and all those rainbows.
And, really, how much worse could he be than John Daly?
Ed. Note: Much of the "research" for this found on Sam Greenspan's hilarious site, www.11points.com. Check it out.
Posted by Chris Rodell at 6:39 AM