"The Russians Are Coming!" to my blog 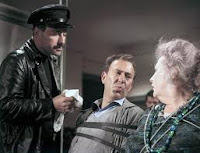 The former Soviet Union is up to its old tricks. In just the past three weeks, the Russians have overrun Germany, France, Canada and the United Kingdom.

That’s not all. They’ve vanquished Denmark, South Korea, Ukraine and the Netherlands, too.

That the eighth most populous nation on earth is on a conquest isn’t surprising. But the target of their takeover certainly is. They’re coming with a vengeance.

Straight for this blog.

I imagine right now my loyal readers in the Pentagon are scrambling squads of F-16s to begin defending my boozy base here above The Pond, the corner tavern that for reasons I keep forgetting is eight miles from the nearest body of water.

Well, thanks, troops! I wouldn’t want anything disrupting the Friday Happy Hour.

If there’s one thing I do to waste more productive hours than nurture this deadbeat blog, it is to check the hidden statistics page to see who’s being even less productive by actually reading it.

In just over a year, this blog has drawn 24,633 U.S. readers -- and that’s readers, not eyeballs. I take great pains to not artificially inflate the readership by counting each of their eyes (if you’re counting at home, that would be 49,266 eyeballs, give or take one or two supposing I might have a few -- Arrr, maties! -- pirate readers).

In that time, trends have held steady: Germany, France and the United Kingdom have taken up pole positions behind the United States.

What’s odd is all of my top 10 countries are in the Northern Hemisphere. I have sporadic readers from 116 different nations, most recently including first-timers from Fiji, Yemen, Brunei, Oman and the Caribbean paradise that is the Turks & Caicos.

But you’d think at least one of my top 10s would be from, say, Australia or Nigeria, an African nation that has a greater population (162 million) than Germany (81 million) and France (65 million) combined.

I can only conclude Nigerians must be very poor.

Or else very tasteful.

But nothing has been as surprising as seeing in the last three months a rapid surge of Russian readers. For the year they barely registered a blip. Now they are on the march.

Sometime today, the 1,000th Russian reader will check in for a browse.

In over a year, no other country has registered 1,000 readers and now people from what Ronald Reagan called the Evil Empire will do it in less than three months.

It’s the kind of attention that 60 years ago would have triggered a House Un-American Activities Committee investigation. I’d have been blacklisted. No one would hire me. I’d be impoverished.

Gee, when you think of it in those stark terms, well, the more things change the more they stay the same.

Could there be something sinister behind all these Russians suddenly reading my blog?

Hell, no! I welcome any readers from any nation, especially ones that are taking feisty steps demanding more liberty. The whole free world admires your bravery.

I don’t know why you’re reading, but I know you are reading and I want you to know I’m your friend.

Ever seen it? It’s one of my very favorites. A Soviet sub runs aground off a small New England island town populated by friendly drunks and Yankee hayseeds. Hysteria spreads among the islanders as the submariners execute a series of capers that are mistakenly thought to be the first steps of a full-scale Soviet invasion.

It’s marvelous. It’s one of those rare films that combine humor, drama, romance and at the heart of it all the divine spark of humanity I believe is firing within civilized men and women all over the world.

Those are the exact same qualities I hope are the hallmarks of this humble blog. And that’s why all nationalities are welcome to the near-daily party.

Like that great American, Bruce Springsteen, says, “Ah, I ain’t here on business, baby, I’m only here for fun!”

One warning to my new Russian friends: It may have worked in “The Russians Are Coming!” but please don’t try and bring any of your subs to the tavern.

This Pond may not have water, but it already has plenty of plenty of subs.