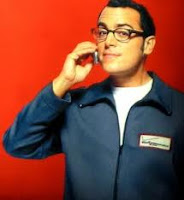 I’m taking it as a sign of evolutionary improvement in that where I used to annoy women by speech or action I can now without any intention annoy them by doing nothing at all.

Happened again last month. I was sitting at the bar having a beer with my buddy and his girlfriend when my phone buzzed. I glanced down, saw it said “HOME” and let it go straight to voice mail.

Actually, she was confusing rudeness with proper manners.

What’s rude is the common practice of interrupting an in-person conversation to yap on a cell phone while your companion sits there like a potted plant.

Many people answer cell phones in public because they want people around them to think they’re important, that someone, somewhere needs them.

Ten years ago I maintained the only thing that should be said into a cell phone in public was, “No! No! No! Make the incision behind the left ear! The left ear!”

Now most of the conversation I overhear involves reminders to DVR “Two and 1/2 Men” or that, gadzooks, Suzie updated her Facebook status to single.

We are inundated by inanity.

I refuse to subject my friends to the minutia of my life. It diminishes me and all within earshot.

“Well, what if it’s something important?”

Then that would be historic. It’s never once been important. Cell phones have made us too dependent on others to make decisions we should all be making for ourselves.

Like what to do when the house is on fire.

That’s what I belatedly learned after I ignored a Friday evening “HOME” call. Our 11-year-old was having a sleepover with two other innocents when the whole house filled with smoke.

The situation was rich with irony because while panic was striking the homestead I was giving my full attention to the father of the very girl who berated me for being casual about answering the phone.

He’s a very good friend. He’s one of the six Regular Joes from my favorite tavern where are all conveniently named Joe. He’s 73 and still healthy as a horse, albeit a horse that drinks lots of tequila. He’s the kind of old school that has a cell phone, but no one’s sure he knows how to use it.

We shared a pizza at the bar and then he suggested, say, why don’t we go enjoy a good cigar at the fancy smoke house restaurant down the street.

It was such a good idea another friend ditched his wife to come along, too.

So there I am with two good buddies, smoking cigars and sipping bourbon with a great bartender and an owner who’s always happy to see us.

That’s a circle of five people who really excel at talking and the lost art of listening.

I remember feeling the phone vibrate in my pocket. I figured either Josie was trying to impress her friends by crank calling Daddy to pretend she’s President Obama inviting me to lunch at the White House, or Val was calling to report Snickers peed on one our guests.

Either way, there was no way I was going to answer it.

Here’s what happened. The basement fireplace doesn’t draw very well. It needs packed with incendiaries to rapidly heat the chimney enough to pull the smoke skyward. This was not done so a choke of smoke began pouring from the fireplace.

Had I been conditioned by custom to answer every call, my evening would have been ruined.

My choices would have been to dramatically announce “My house is on fire!” and run from the bar, which would have led everyone to suspect I was trying duck my share of the bill, or logically say, “Call 911! I’ll be there as soon as I’m sure I won’t get in the way!”

Instead, by ignoring the phone call I was free to say to my good friends what at the time was in my heart, which was: “Let’s all have another round!”

So all’s well and some lessons have been learned. Val’s learned to use more kindling for basement fires and that she’s capable of low key heroics when she’s alone with the kiddies.

And I’ve learned to just leave the cell phone at home next time I want to spend time with friends. Because some smoke-filled rooms will always be better than others.

That is tragically funny.
What I find most astonishing is that you were reprimanded for not answering your phone while in that very person's company. It has now become such a norm that people probably don't even take offence anymore.

Yes, the etiquette has completely flipped, Roger. I'm now considered rude for behaving in ways that used to be exemplary. Amazing.

Thanks so much for reading! I hope you'll continue to check in and refer to friends whenever you find it worthy.