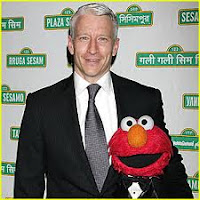 Sometime in the next 24 hours, one of America’s most visible news anchors is going to do something that will demolish his credibility.

He will cavort, he will mug, he will giggle like he’s being tickled by endless feather-filled breezes.

Of course, that’s something Anderson Cooper has since September been doing every day before lunch.

He will be hosting CNN’s New Year’s Eve coverage from Times Square. His co-host will be comic Kathi Griffin, whose mission is to so thoroughly embarrass Cooper the network will be forced to issue an apology for her behavior.

That no one finds the pairing incongruous is symptomatic of all that’s wrong with the 24-hour news cycle.

Griffin is funny, irreverent and prone to spastic outbursts of emotions.

The problem is so is Cooper.

And for this he is celebrated. CNN honcho Jonathan Klein called Cooper “the anchorperson of the future.”

Broadcasting & Cable magazine said Cooper’s Hurricane Katrina coverage ushered in a “new breed of emo-journalism, skyrocketing Cooper to superstardom as CNN's golden boy and a darling of the media circles because of his impassioned coverage of the storm.”

His news skills are such that he’s been elevated to the very pinnacle of broadcast news excellence, a regular position on “60 Minutes.”

What demographic are these outlets seeking to tap when they hire Cooper? Kids who no longer feel challenged by MTV News?

The world and national news should be like married sex. It should be straight-forward, business-like, tickle-free and the whole thing should be wrapped up in under 22 minutes.

He’ll tear-up over famine in Asia, darken in rage over tribal conflicts in Africa. I see him doing a report over endangered sea creatures and feel sad I can’t rush to New York to give him a reassuring hug.

Anchors used to have about 30-minutes. Someone as hysterically over-exposed as Cooper is on for two-hours at a time, minimum.

So in addition to true news, we get to see the playful Cooper, the pensive Cooper, the caring Cooper and the Cooper who shares he doesn’t much like spinach.

We see every side of Cooper except the one he’s oddly coy about, the gay-or-not-gay Cooper.

“Out Magazine” listed him in 2007 as the second most powerful gay person in America.

The declaration should have had “Out” readers suggesting editors change the magazine name to “In” because Cooper has never said one way or the other.

“The whole thing about being a reporter is that you're supposed to be an observer and to be able to adapt with any group you’re in, and I don’t want to do anything that threatens that,” he’s said.

That’s just silly. People aren’t going to watch or decide they are going to talk to him based on whether he’s gay or not.

I still tune in even though it’s clear he’s an ass.

I don’t understand why Cooper is considered, egads, a modern Walter Cronkite when another zipper-thin contemporary is dismissed as a shallow boob.

To me, Cooper and fellow lightweight Ryan Seacrest are journalistic twins.

What’s happening isn’t as important as the fact that each is on television getting to say that it is.

This became clear to me in September when Cooper began hosting “Anderson,” a syndicated yap fest in which he interviews people like Jerry Seinfeld’s wife about things like zucchini.

It’s a daily disgrace that in another day would have led both CNN and CBS to terminate Cooper for acting more like a showman than a newsman.

I remain part of the problem because I still watch CNN. I’ll be among the multitudes tuned in for their New Year’s Eve coverage to see if Griffin gives Cooper a wedgie.

The next day CNN executives will look at the ratings and be pleased, I’m sure, that so many viewers tuned in to watch the big ball drop.

What their charts won’t detect is that many viewers like me were watching in hopes it would land on the host’s head.