When I'm mayor of Pittsburgh 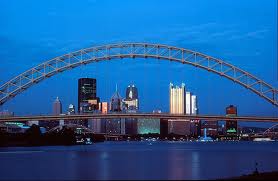 I was reminded again this weekend that one of these days I really should get around to running for mayor of Pittsburgh.
Really, I can’t imagine anyone doing a better job of showing off the city.
I do it all the time, but this past weekend’s always my Pittsburghpalooza. It’s when I have about a dozen buddies come to town to watch a Steeler game.
They’re true New Yorkers. They love the Big Apple, as do I. But to a man (and a woman or two), they rave about Pittsburgh, its restaurants, its views, its teams and all it has to offer.
One of them, a New York limo driver to A-list stars, says if he ever wins the lottery, he’s not moving to the Caribbean. He’s moving to Pittsburgh.
He means it.
And, ahem, that’s mostly because of me. I know the city well enough to entertain them by taking them places only the most convivial locals know.
Over the past 10 years, they’ve made friends with bartenders at Penn Brewery, Roland’s, Jack’s, the Original Oyster House and dozens of dives too notorious for decent folk to visit.
We’ve dined at LeMont, Monterrey Bay, Vincent’s Pizza, Jo-Jo’s, Sonoma Grill and on Saturday had a wonderful meal at Six Penn Kitchen, one of the city’s best.
They’ve relaxed by the out-of-the-way shower fountain that runs beneath the convention center, enjoyed river jaunts on the Gateway Clipper and drank in the magnificent view of the Golden Triangle from atop Mt. Washington.
As mayor, I’d have key to the city advantages and a wider reach to promote the city I love.
I’m sure in one term, I could have people around the world talking about Pittsburgh like they do Paris.
First off, I’d need to get Pittsburghers as excited about the city as I am. Right now, they are not. They take it for granted.
Here’s what I’d do to change that and get everyone on the same page. I understand some of this might be extreme, but it would benefit city business establishments, tax revenues and city psyches. Alas, even Pittsburgh has its share of fun-resistant people. They need to be dragged into the party for their own good.
Feel free to apply these to your own home cities. Most of them can work anywhere.
Plus, with Tomlin running Pittsburgh, I’d be free to do what I do best.
Go out and just enjoy it.
Posted by Chris Rodell at 1:43 PM

That's excellent. Maybe after you revitalize Pittsburgh, you can help out the 'Natti!

Funny, lexcade, I should really start in Latrobe, my actual home! I'm sure Cinci has the same conditions as Pittsburgh in many ways. Maybe my problem is more with the people than the places.

Good ideas, although I'm not sure the Chilean miner thing would work out but closing off the entire city for 48 hours. Sure, it might bring people together, but there might be trouble for those people locked outside--like the miner who had a wife and a mistress finding each other out.

Mike Tomlin for mayor? Maybe... although I'd personally vote for Mario Lemieux.

You can't go wrong with Mario, Michelle. Still, I think he's earned the leisure and has the disposition to enjoy it. Tomlin's still crazy nuts about getting the job done. The mans' amazing. Thanks for reading!